Mosquitoes Ain't Got Nothing On Us! 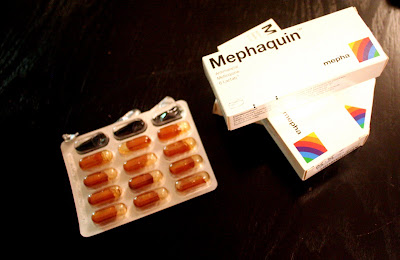 You have to hand it to the pharmacies in Dubai. They are pretty much totally deregulated and ready for anything. Matt dropped by our local store just the other day to stock up on some travel essentials for the trip that we will be taking over Eid al-Adha (the "Festival of Sacrifice" is a religious festival celebrated in commemoration of the willingness of Ibrahim to sacrifice his son as an act of obedience to God. It happens approximately 70 days after Ramadan).

We are lucky enough to have three days off, and have decided to plan a trip to see some of the surrounding areas. For sensitivity reasons, we aren't going to disclose our location until we get there, but let's see if you can guess!
Matt returned from the pharmacy with Advil, Excedrin, Benadryl, Imodium, and two other interesting choices 'TravelGuard' capsules which contain major doses of the 'good' digestive bacterial, you know the stuff found in yogurt, which is supposed to toughen up our stomachs before we go. Oh, and Mephaquin, maybe you've heard of it? No? It's your basic anti malarial tablet. Apparently we weren't aware of the malaria threat at our desired location and as a result we are on a crash course of anti malarial drugs.
The most interesting part? In order to make sure that the drug has the desired prophylactic effect, we need to keep taking it for 4 weeks after our trip! I'll be fighting malaria until after Christmas! Hope it's all worth it! Can you guess where we are going?
Posted by Katie Shaver at 12:10 PM

I've got it - Fort Lauderdale!