Katie, could you pass the Grey Poupon?

We have a new starlet in the house - at least according to the National, the UAE's daily newspaper. A couple of weeks ago, Katie auditioned for a part in an Indie movire called "Expats", a view into the expatriate world of Dubai. Nevermind the shear relevance of Katie playing an expat in Dubai - this a movie that exposes all of the issues of Western families that deal with the personal and professional world of the Arabian peninsula.

During the audition, Katie was written up in the Dubai newspaper with the director of the film. Without further adieu, the rest of article is here: 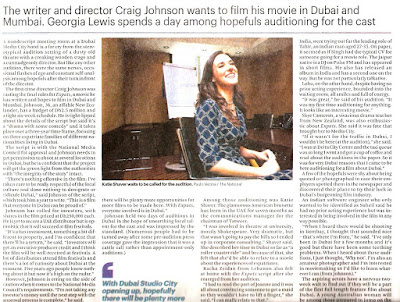 Hmmm...Katie playing herself. Are you sure this movie wouldn't be better titled something like, "There Will be Pretzels"?

You're right. That was bad.