Just a Typical Day in Dubai

I thought that living in New York City would prepare me for exactly how bold I would need to be to get around Dubai. However, it looks like the NYC experience didn't even scratch the surface and I find myself needed to be more bold and aggressive in order to get things done in this town. Today, I found myself in a particularly precarious situation and I think it might be time for me to dial it back.

It all started when I was running late for one of my meetings. The area I work in, Garhoud, is notorious for it horrific parking situation. Every morning I battle to find a space and when you do find a space everyone parks one another in. The only remedy to this problem is that people leave their business cards on the windshield and you are expected to call them if you need them to move their car.

Today, I was able to find a spot but to my dismay, when I went to retrieve my car, there was a car parking me in but, the car was still running with no driver to be found. I walked around the car and peered in the tinted windows but couldn't see anything. After two minutes of waiting and the frustration of being late for my meeting growing, I decided I needed to take action. I jumped in the driver's seat to reverse the car enough so that I could have room to pull out.
As I the throw the car into reverse and look over my shoulder… I scream. Not just any scream...it was the kind of scream that you hear in a horror movie. 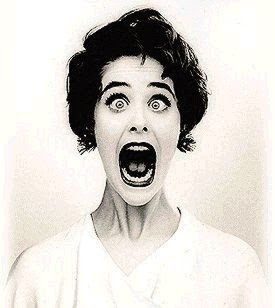 There was unsuspecting Pakistani man sitting in the backseat. I tried to explain to him, through my laughter and shock, that I was simply trying to the move the car a few feet because he was blocking my car. I think there was some time of language barrier because this poor Pakistani man didn't seem to be startled in the least. By the time this ordeal was over, someone had pulled up behind the car and I was unable to reverse. I figured I was this deep and desperate times call for desperate measures so, I pulled the car into the only other available space, a construction site. After putting the car in park, I apologized profusely and jumped out and ran laughing to my car.

'Glad you kept your sense of humor. Driving tests would be so much more fun (and practical) if this could be included in the parking part, don't you think?