Battle of the Brunches 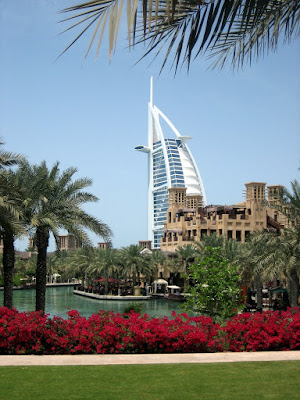 As you may have gleaned from one of Matt's previous posts brunch is a huge deal in Dubai. The spreads of food and drink are unlimited and it is not uncommon to spend 5 or 6 hours sitting around the table with friend's. The battle for the top brunch accolade is fierce in Dubai, and TimeOut recently named the bunch at the Al Qasr hotel at the Madinat Jumeirah the number one spot in the city. One of our friend's had her sister and cousin in town this past weekend and it gave us the perfect reason to go try out the top spot. It was enormous! The hotel flings open the doors to each of its 7 different restaurants and sets up food stations on the outdoor patios. There was Thai, Indian, Mexican, Spanish, Lebanese, British, French, and American foods along with a huge seafood and sushi bar. Unlimited drinks are also included and vary just as much as the food. There is cider to go with the mushy peas at the UK station, mojitos at the Mexican station, wine at the tapas bar, and mai tais at the Thai station. As we indulged in the delicious food and drink, a live cover band sang songs from Sean Kingston, Bob Marley, and Jimmy Buffet. We periodically got up between courses to bust a few moves on the dance floor - anything to burn a few calories! All in all a great time, and much more 'civilized' family-oriented brunch then we've at Yalumba (Dubai's other top brunch) where the day ends with people dancing on tables. This one ended with the entire restaurant singing Happy Birthday to a 70 year old grandma, and watching her dance around the floor with her family was better than any dance on a table I've seen!
Posted by Katie Shaver at 2:46 PM