It's hard to deny that Dubai is a city with some great food! You can get almost anything here, from sushi to sandwiches and curry to crepes, you don't have to look far for your favorite foods. Unfortunately, part of that reality is that eating out in Dubai can be really expensive - nearly everything is imported (you can't grow much in the desert) and a bottle of wine is usually about 8x what you find in the US. (No kidding, Yellow Tail is about $50 a bottle here...you know the stuff you can buy at CVS for $6.99?)

Taste of Dubai offers patrons the option of trying a miniature version of dishes from the trendiest and tastiest restaurants in Dubai and keeps you entertained while munching away. The only catch is that to buy the dishes from the various stands you have to use a form of fake currency defined by the event, and each one of these monopoly monies costs 5dhs ($1.36) and a standard dish is 8 fake bills so yeah, in reality it's about $10 a dish - not exactly a cheap night out when you are sampling several.

But it's still a great way to spend an evening! In addition to sampling the wares, we participated in a South African "whites" wine tasting, watched a throw down in the chef's theatre a la Iron Chef, and even attending a cooking class taught by Chef James Martin and made a grilled chicken and curried pumpkin dish. They best part is you can have all the fun and not have to do the dishes! 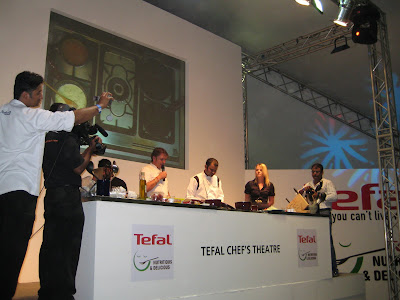 The Chefs from two of the Radison hotels faced each other in Battle Seabass! 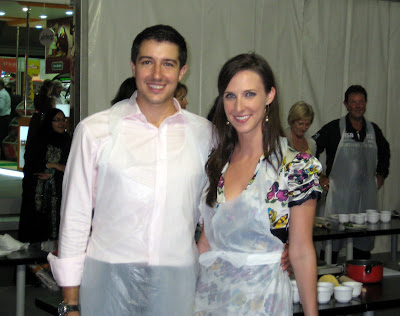 Probably the only picture of me in an apron, er...trashbag. 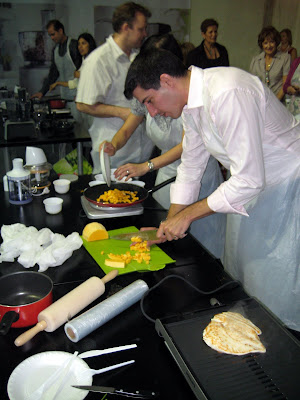 Matt getting down and dirty with some butternut squash in our cooking class.  I'm "monitoring" the chicken via the viewfinder. 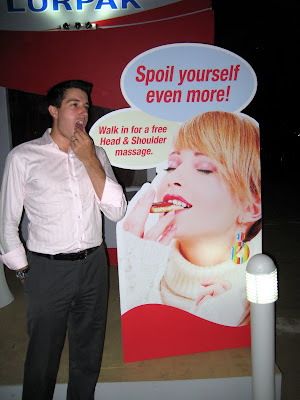 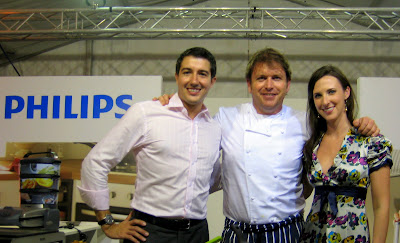 Chef James Martin.  We don't actually know who he is but apparently he's on alot of UK cooking shows.  Wikipedia also tells me that he holds the world record for most carrots peeled and chopped in one minute - who knew?
Posted by Katie Shaver at 2:39 PM

Butter, knives, wine, fashion (yes, trashbags count). It's easy to see why the two of you were drawn to this event.