A Sendoff for Grandpa Louis

Just a few days ago, we lost an icon of our lives:  Our infamous Grandpa Louis passed away in Washington, DC.  I say "Our" because he was Grandpa to more than just my brother and I - he was presence to everyone he met, and an honorary grandfather to many, many people.  To say he will be sorely missed, well - that's just a lie.  The world won't be the same without him, and while we will pay proper homage to him very soon, Katie and I took some time this weekend to honor the Louis we knew as larger than life.

First an foremost, I felt that his quintessential drink was in order.  Since dubbed "Seawater" (yes, that's what it tastes like!), it's a mixture of gin, olive brine, and olives.  However, we were at a roadside bar off the coast of Africa, and language was a bit of a problem.  After they brought me a gin and orange juice (nope - try again!), the manager came out and told me that all they have are pre-packed olives with herbs, spices, and peppers.  With the entire staff looking on, we indulged - that dirty, salty, stiff drink never tasted so good.  (Sidenote: the first drink I ever bought Katie to try and impress her?  A Louie Special - an then she married me!) 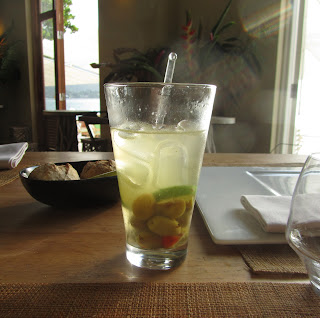 Next up, it was time to show the man who spent so many days teaching me how to fish that I really earned my stripes.  We rounded up a couple of Somali pirates fisherman and headed out into the rough morning sea (I'm only half-joking - we were only a few hundred miles off of Somalia, smack dab in pirate waters).  Katie got into the action as well, and Grandpa was definitely smiling down on us.  Not 10 minutes after hitting the fishing grounds, ALL FIVE poles got a fish on at the same instant - and all five landed 35+ pound yellowfin tuna. 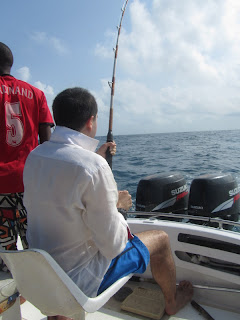 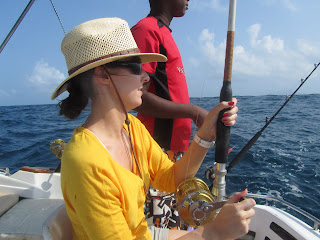 Just like Louis taught us as kids on Seneca lake, we clubbed those fish senseless and threw them in the baitwell for lunch! 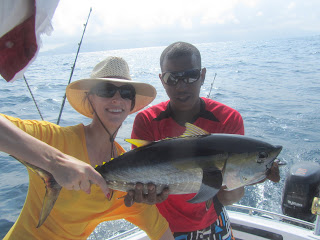 Lastly, and most importantly to our sendoff, was sitting under the stars and smoking a pipe.  Well, I never did try that pipe - and this night was no exception.  We were downwind from a bunch of cigars, and the similarity to Captain Black tobacco was close enough to cap off the long day by swapping memories under the bright starry sky.

Katie and I just barely scratched the surface, and we hope that all of you out there that knew him find a way to celebrate his life in your own special way - I know we will for a long, long, time.  We'll miss you, Grandpa - more than you can imagine.  Stay tuned for our full homage to Louis Leach in the coming weeks...
Posted by Matthew Mueller at 9:31 PM

I'm sure Grandpa would be impressed and honored by your celebration.

We won't try to top it when everyone gets together in Watkins Glen, but I bet we hear some stories we haven't heard before - bring your digital recorder!

Thanks for this posting. It made me laugh and I am so happy that both you and Katie appreciated him for the wonderful person that he was. I am certain that he is looking down on all us and enjoying the adulation being heaped on him. He loved to be the life of the party and even in death he continues to party on.