There are a number of ways you can be competitive with food. You can guess how many jelly beans are in a jar. You can see who can stuff the most marshmallows in their mouth, or stack the highest french fry tower. Heck, I've even had lobsters race across my kitchen. But my favorite competitive food has to be found at Nineteen Restaurant's Iron Chef Night. Tucked away in the Montgomerie Golf Club, this little gem has never disappointed us since we discovered it 3 years ago.

After attending the Iron Chef throw down in March we were anxious to get back through the doors and last week we got the chance to sit center stage at the head table with our friends Tom and Veronica and Ben and Elizabeth. The anticipation was high this time around as the participating chefs were a rematch from the March line up we attended. 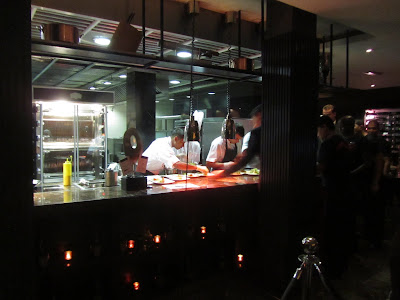 David Attwater from the UK, Chef de Cuisine at the Address Montgomerie Dubai, was the Challenger and Specialty Sous Chef Chinthana Pathirana from Sri Lanka, from the Dubai Marina Yatch Club was the defending champ after taking the prize in March, April and May! 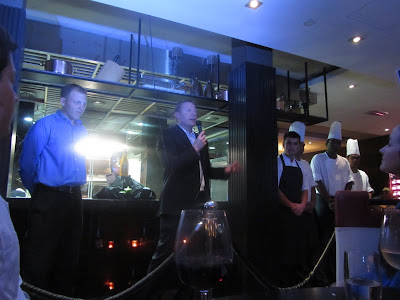 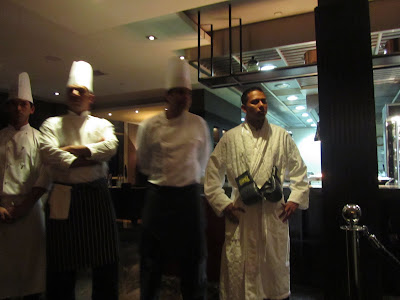 The secret ingredients for the starters, main, and dessert were: cauliflower, prawns and milk, respectively. The evening started with pretty even marks for the starters, as both were delicious and beautifully presented. I was taken by surprise, however, as I was chewing my tempura oyster from the Black Team's menu. There was a piece of grit in my oyster that I crunched as I was chewing. Assuming it was a bit of sand I powered through only to bite down on this solid piece again - it felt like it could have chipped a tooth! 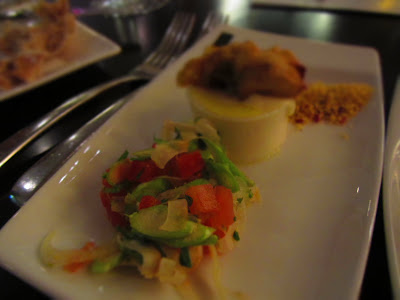 As artfully as possible, I decided to remove the offending object under the cover of a napkin - and thats when I pulled a pearl from my mouth! It was size of a large salt granule, nothing to set and mount, but it was unmistakable - extraordinary! The table couldn't be sure that this wasn't the Black Team's attempt at bribing me! 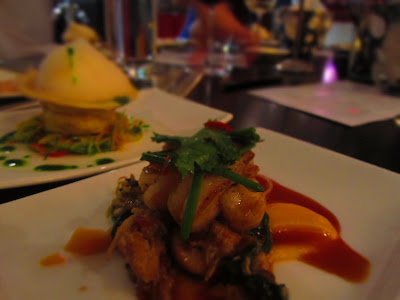 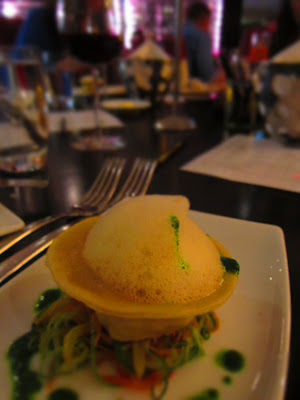 After enjoying treats from both teams our minds were made up - it was a clear landslide with our table averaging 27 points for Team Red and 42 points for Team Black. Black had taken the day with their taste and their presentation. The moment came for the big reveal and Chef David Attwater's team had won back their title! Previously ceded to Chef Pathirana in March they had come back to win this time around.  In the end, the big winners are us - the adoring fans that get to eat two meals! 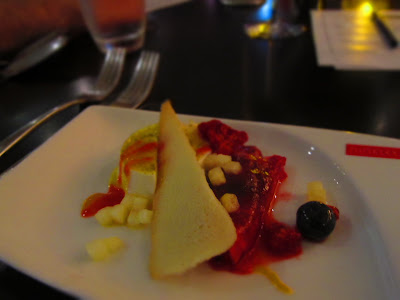 The challengers dessert: a berry ravioli with flan. A sweet send off from the new champion!  I'm a sucker for a pink macaroon! 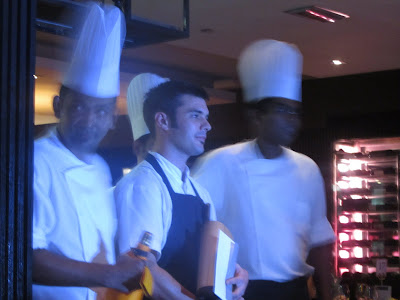 Anyone who thinks they can convince Katie Shaver that it's OK to serve a dessert that includes berries must be a better chef than I.