After our travels to Cambodia and Laos we landed back in Vietnam and prepared to conquer the coastline, we had 4 more cities to go and so much more to see.  Next stop was Hanoi (spelled Ha Noi in Viet Nam).  We had heard a lot about Hanoi when we were in Saigon.  As the two largest cities in Vietnam and sitting almost diametrically opposed to one another geographically (and often culturally and politically) the guide in Saigon would often draw contrasts with Hanoi.

Now we were finally in the Northern city so we got to draw our own conclusions.  The first was that it felt, well more...communist.  The people were friendly but maybe not as warm, and there was more of a 'law and order' feel.  The people of South Vietnam have a nickname for those in the North, translated from the Vietnamese it means "hard faces".  I can see what they mean.  There is a reserved element to your interactions and a bit more disdain for foreigners.  Whereas in Saigon we felt embraced in Hanoi we felt appeased.

The city is rich with history and the French colonial time has had a big impact on many parts of the city.  One of the few places in the world where they ask you if you want some baguette with your noodles!

Here are some of the sights and sounds from Hanoi! 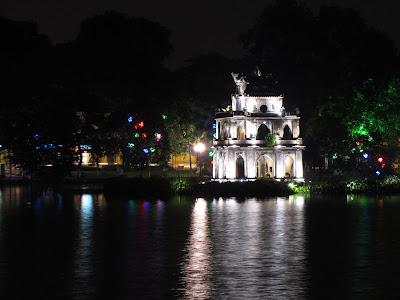 The Tortoise Tower in the middle of Hoan Kiem Lake (tortoises are a sign of good luck and apparently several large ones inhabit the lake - although you have to be really lucky to spot one). 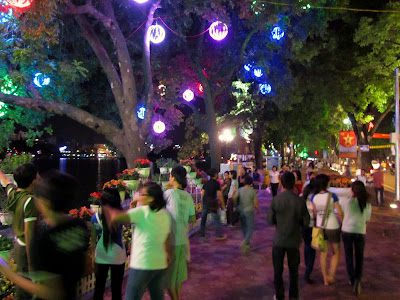 A Friday night in Hanoi strolling along the lake in the Old Quarter. 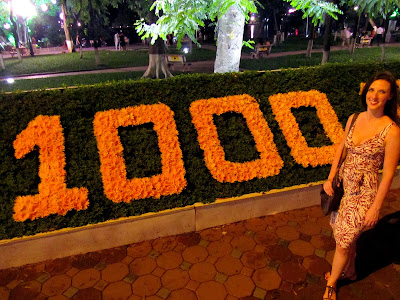 This year marks the 1,000th year anniversary of the city.  Major celebrations are planned for October this year and the city is already decorated and ready to go.  There is an electronic board with a countdown going! 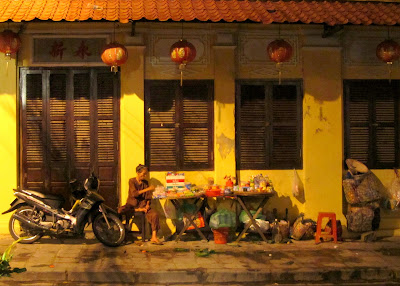 Cool scene from the Old Quarter. 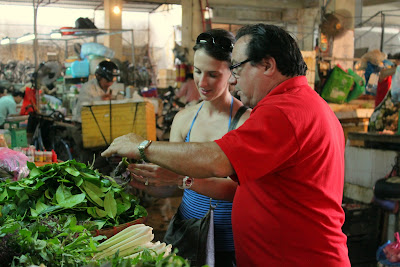 The next morning we took a market tour and cooking class with chef Didier Corlou. 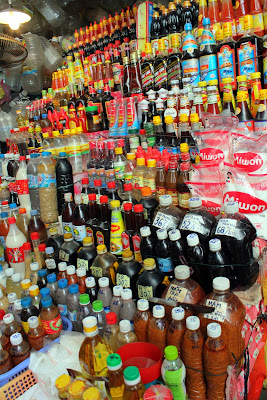 Fish sauce (bottled in 2nd hand containers)!  If you don't love it, you better learn before you come to Vietnam.  It goes on everything. 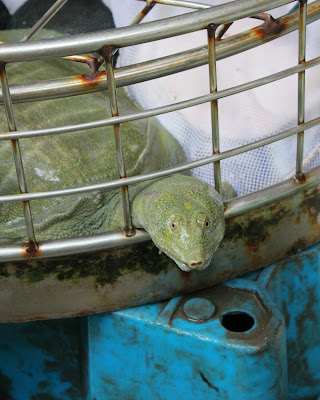 A face only a mother could love. 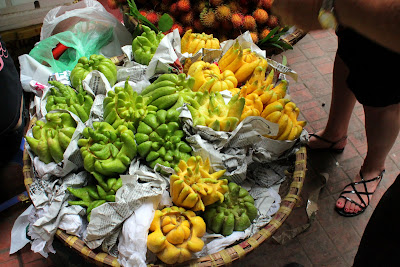 The 'hand of Buddha' lemon!  We've been trying cultivate just one of these beauties in my in-laws' backyard for a year, and they just grow tons of them here! 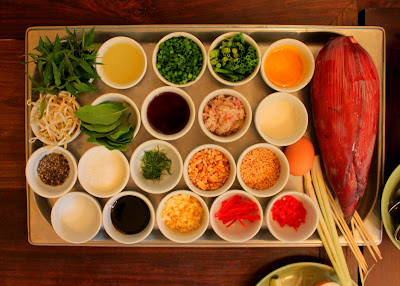 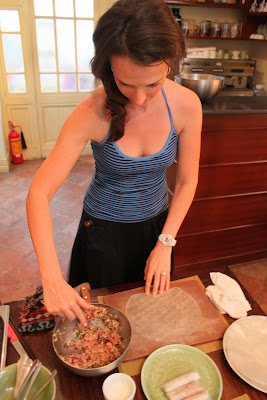 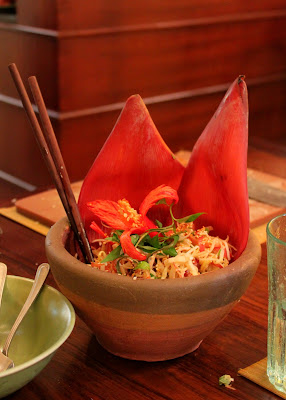 I was pretty pleased with our banana flower salad. 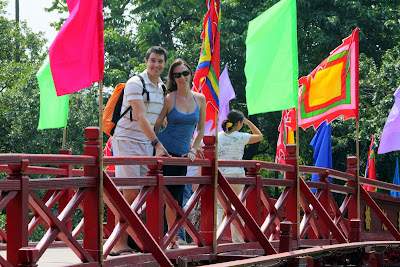 Standing on the Huc Bridge on our way to the Ngoc Son temple dedicated to General Tran Hung Dao.
Read about his 13th century military victory here to find out why he is so special. 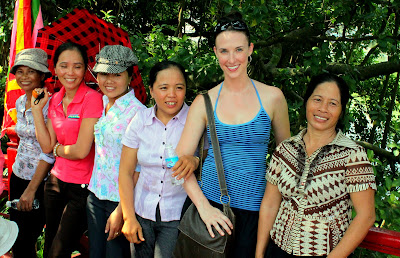 One of these things is not like the other.  :)  Notice the woman linked with my arm.  As I excited the temple she physically ran after me and grabbed my arm with such force that she spilled her entire bottle of water on Matt and I.  Then she shouted excitedly to her friends who came running, and then whipped my sunglasses of my face so she could see my eyes - then of course demanded a picture.  I was flattered, but stunned! 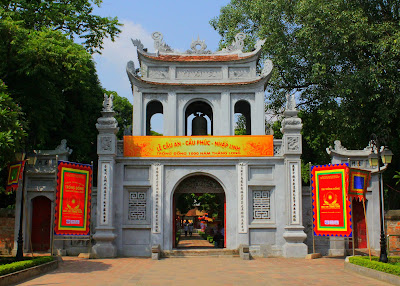 Entering the famed Temple of Literature.  Founded in 1070 by Emperor Ly Thanh Tong and dedicated to Confucius. 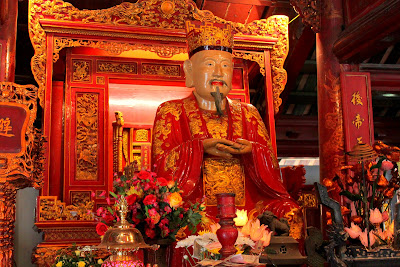 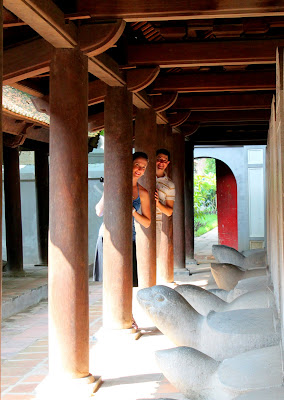 Soaking up some good luck from the tortoises at the Khue Van pavilion. 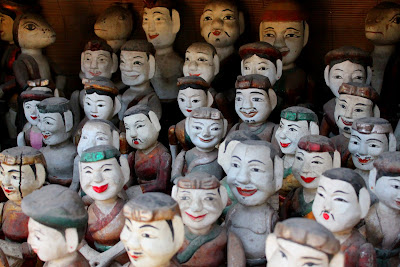 This picture totally disturbs me.  Why is only one of the water puppets looking at the camera?  It's like the Vietnamese Chucky doll.  I don't trust him. 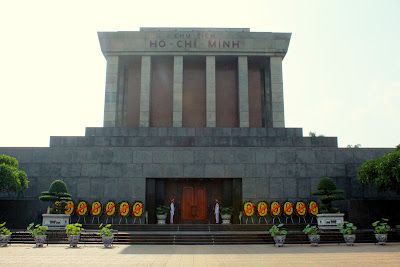 Ho Chi Minh's Mausoleum.  He specifically asked for cremation but I guess his followers had other plans.  The building is supposed to look like a lotus flower?  I see concrete box.  Is it just me? 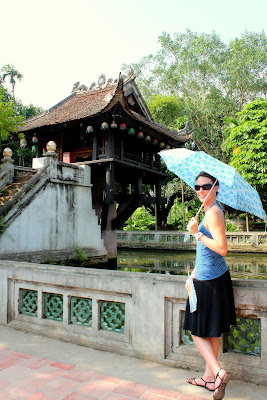 The "One Pillar" pagoda was built in 1049 and lasted until 1954 until the French blew it up as one of their last acts before retreating from Hanoi.  Really French?  The thing lasts 896 years and you take it out?  A reconstruction built 50 years ago isn't nearly as thrilling.  Thanks a lot. 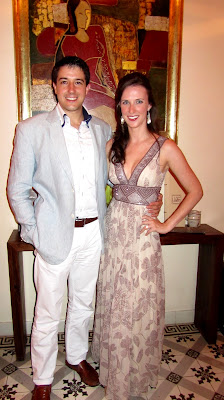 Our last dinner in Hanoi at the Verticale restaurant.
Posted by Katie Shaver at 1:27 PM

I'm disturbed by the puppet head, too.