From Sai Gon to the Me Kong...

If Vietnam has a soundtrack in my head I believe that it's a combination of the following songs on repeat: Buffalo Springfield's "For What It's Worth", Barry McGuire's "Eve of Distruction" or the Stones "Gimmie Shelter".  After watching Platoon, Full Metal Jacket, Air America, Forest Gump,  numerous history channel documentaries and Tropic Thunder (because I needed a laugh after the first set) I was chock full of Vietnam war history (and music).

Ever since the North Vietnamese Army marched on Sai Gon in April 1975 the place has formed a bit a duel personality - a begrudging member of the new unified Vietnam, but still fiercely independent, American-friendly, and capitalist by nature - to this day they still have distinct personalities from their Hanoi counterparts.  Most of the war history is preserved in Sai Gon and as they say, "to the victor goes the spoils".  The North has rewritten most of the war time history.  It was a bit surreal first stepping foot out into the city as Matt's Mom said "I can't believe I watched these places on TV 30 years ago and now my kids are visiting it".

Sai Gon was one of our favorite Vietnam cities!  It's young, hip, and has a great energy.  Everything moves at a quick place and the people are friendly and quick-witted.  It's definitely on our Greatest Hits list!

Sunrise over the Saigon River - jet lag has it's benefits! 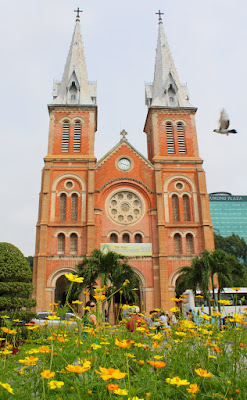 The beautiful Notre Dame Cathedral a present from the French colonists.  10% of Vietnamese are still practicing Catholics. 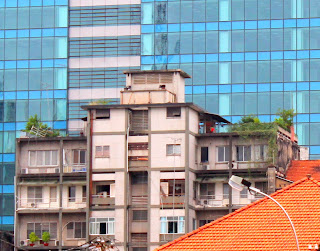 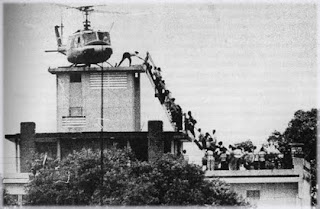 After the North stormed the gates of the presidential palace, an evacuation effort was underway.  This is not the US embassy.  It's a common misconception.  This is 22 Gia Long Street, which was used for CIA housing. 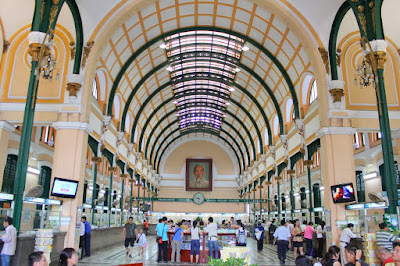 The old post office with a picture of "Uncle Ho" in the background.  I'd use a stamp if I got to come to a place this nice! 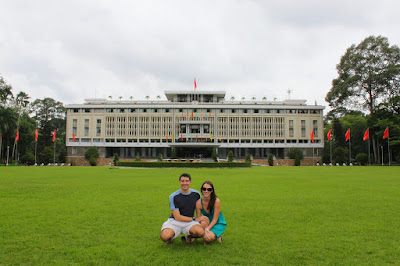 The Reunification Palace - striking 60's modern architecture and a weird feeling inside like time stopped on the morning of April 30, 1975 and nothing has moved since. 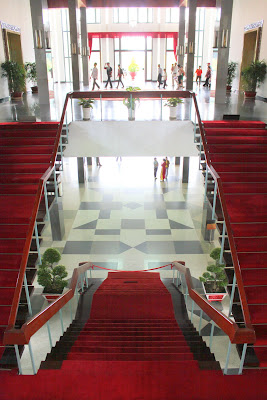 The staircases inside the palace.  A bomb destroyed the center one in a 1962 coup.  It's a modern monstrosity - yuck - haven't they ever seen Versailles? 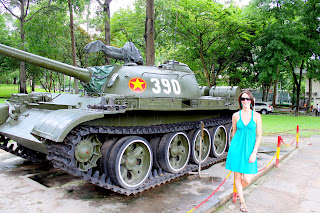 This is the tank the stormed the gates. 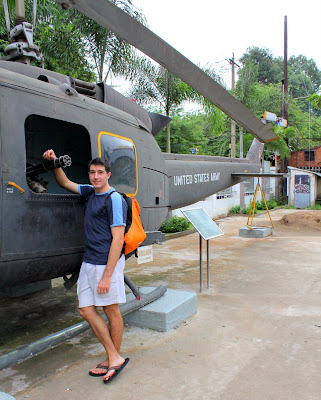 There is a huge collection of American military machinery at the War Remnants Museum, previously known as the Museum of Chinese and American War Crimes.

Do we need any of this stuff back? 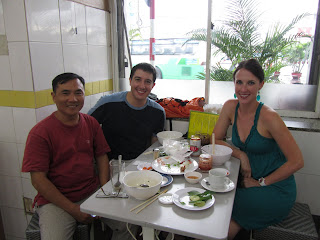 Our first bowl of pho, the staple of the Vietnamese diet, it's a delicious broth and noodle soup.  Our guide Bien (pictured) was a kid during the war and remembers loving the American soldiers in Sai Gon.  "They would draw a military watch on my wrist with a pen and give me Cokes."  and then later "they liked to get drunk and flirt with the ladies in town".  No kidding. 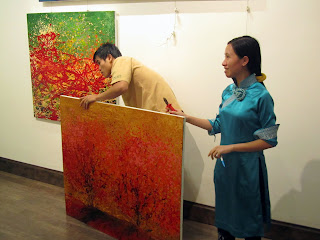 Art shopping!  There are a lot of incredible artists making a splash in the Eastern art scene.  This beauty came home with us! 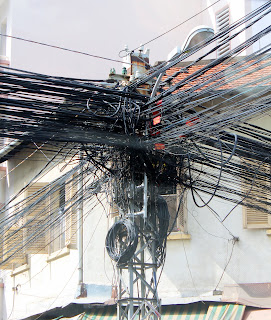 If Sai Gon has a soundtrack it's the sound of 4 million motorbikes hitting the streets every morning. 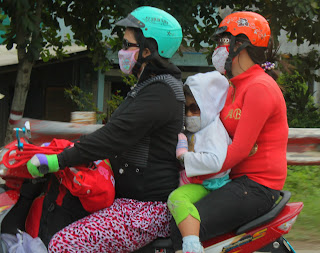 It's not uncommon to see more than 2 people on a bike.  In this picture it's about 100 degrees outside.  Sunscreen is too expensive, so to protect their skin the women bundle up like it's winter outside, knit gloves and all!  The face masks are to cut down on inhaling the air pollution.
We spent one day outside of the city proper and headed 3 1/2 hours south to the evocative Me Kong river delta.  Life moves a lot slower here and is completely focused on the resources provided by the river.  Most families live on boats full time and it's not at all odd to see floating classrooms for the kids. 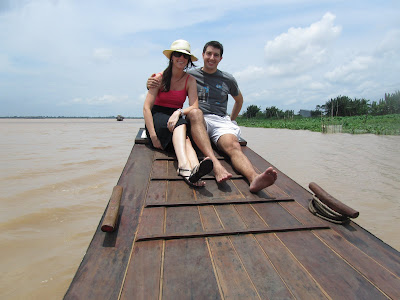 The only way to see the Me Kong is via sampan! 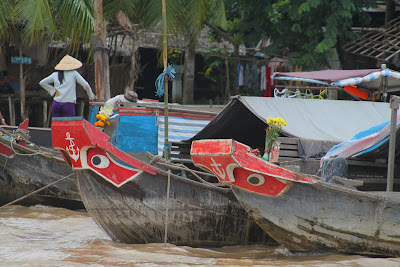 No one will get on a boat without eyes - it's bad luck - and you need to be able to scare away any sea monsters that cross your path - seriously. 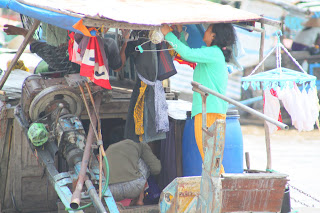 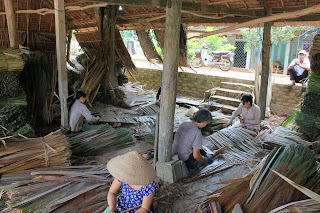 A palm weaving workshop.  These ladies can make a new roof for a house before I could braid a bracelet. 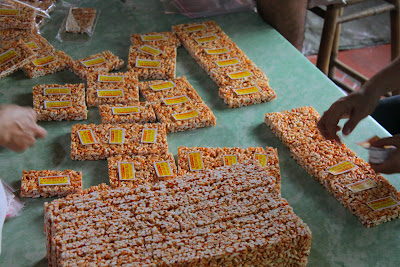 The original rice krispy treats!  They call it 'pop rice' and make it in a huge pot over a fire and add coconut milk instead of marshmallows. 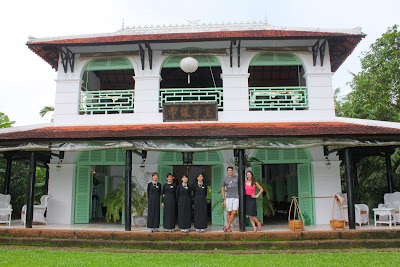 A holdover from the French period.  We got to have lunch in this beautiful villa. 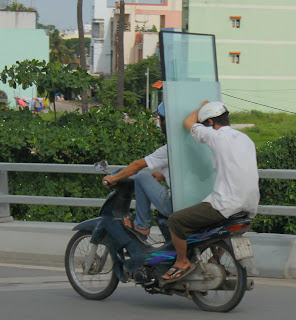 On the way back to Saigon we spotted this!  I hope these guys made it with the glass in one piece!
Posted by Katie Shaver at 3:47 PM

Great photos - and fascinating commentary. While we oldsters still listen to the music you mentioned, we also remember the war wounds inflicted on that country, and ours. It's both heartening and frustrating that these seem to have passed into history so quickly. Does that mean we learned something?