This is a public service announcement to remind all our loved ones to take fire alarms seriously!

Matt and I were lounging on the couch watching Toy Story 3 (don't ask, don't tell) and enjoying a relaxing Saturday evening when the utterly piercing sound of the building's fire alarm cut through everything.  Haven't never heard our fire alarm before we paused momentarily and then went to grab our shoes.  Just as we had made it quickly to the closet the alarm stopped.

We figured that it was a quick test or a glitch of some kind and just as we were ready to hit the couch again the alarm came through with it's skull-splitting sound.  Being on the 28th floor we weren't looking forward to the trek, but truly it's better to be safe than sorry.  So we went bounding down the stairs until we turned down the stairwell at the 11th floor and were hit with a wall of smoke and noxious fumes that smelled like burning plastic.

My heart rate immediately doubled as I realized that this indeed was not a drill.  We pushed on for another flight of stairs with our shirts over our nose and mouth to filter the air until it was clear that the situation was getting worse.  Matt quickly remembered that our building had two sets of stairs on either side of each floor and suggested we make a run for clearer air.  After quickly checking the wood door with his hand, he instructed me to run as fast as I could to the other side of the hall.  We opened the door and smoke hung in the hallway, and we noticed that the circuit breakers cabinets were open and smoking.  In a few seconds we were in the opposite stairwell and the air was clear - whew!  We ran down the next 9 flights two at a time until we hit the parking garage and were home free. 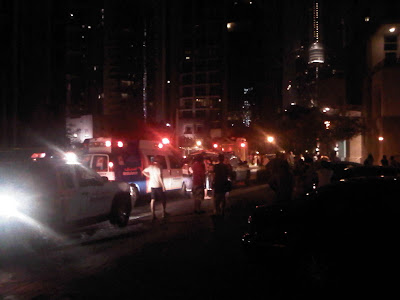 There was a lot of confusion on the ground and within minutes the police, rescue, ambulance and fire departments had arrived.  The smell of smoke and burning plastic hung in the air outside, and at 110 degrees is was a tough to be stuck out there (considering I had hopped off the couch in knit pajama pants).  Matt and I looked on for awhile until we decided to kill some time but walking to the local grocery store and stocking up. 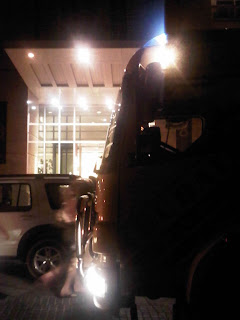 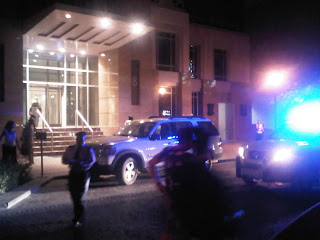 2 hours later we were allowed back into the building with 2 conditions.  The residents of floor 10 could  not re-enter there apartments and we had to take the stairs.  For anyone whose counting - I know I was - that's a total of 54 flights of stairs equaling 1008 steps!  A small price to pay to be safe, but who knew how hard safety was on the calves?

Thankfully no one was hurt.  They are still looking for the cause of the fire...
Posted by Katie Shaver at 4:29 PM

Update: Apparently (and I do mean that like "apparently, but not really") it was a candle in an apartment on the 10th floor. As a result, candles, stoves, matches, lighters, incandescent lightbulbs, and the sun are all banned in our building.

Just kidding - they say candle, but that's only because they have absolutely no idea what caused the fire :)