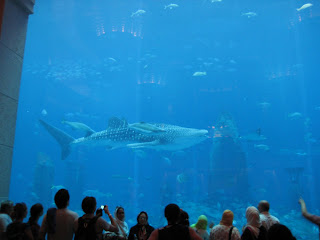 It's been almost 18 months since our gal Sammy the Whaleshark was "rescued" from the waters of the Arabian Gulf off of Dubai. Her arrival was met with a lot of protests and speculation regarding the exact method by which she came to swim center stage in the Atlantis' center tank. Environmentalists and activists were upset that the whale shark -- a juvenile and a protected species -- was being kept in a cramped tank as a ploy to attract tourists to the hotel. The story grabbed headlines around the world; children walked around with "Free Sammy" buttons and the "Free Sammy The Whale Shark" Facebook group climbed to 11,500 members (versus a group called "Lets Eat Sammy the Whale Shark," which suggested people should take some time to "decide whether Sammy prefers to swim free or become a main course in a Ramsay or Jamie Oliver restaurant," and only had five members when we checked).

With all the fanfare that surrounded Sammy's arrival, what's more interesting is the utter silence under which she was released a few weeks ago. No media, no fanfare, no uhhhh...witnesses? Sammy disappeared from the tank and 24 hours later a press release was issued that said the season, the water temperature, and the migratory patterns of her peers had all aligned and it was time to put the "rehabilitated" Sammy back into the wild.

Skeptics are demanding to see photos or video footage of the release, and are shocked and awed by the Atlantis's low key demeanor regarding what would have been a huge PR event for them. Atlantis claims that they purposefully didn't tell anyone because they didn't want spectators on land or shore hindering the release. Rumors are rife that Sammy was sick and that she was disposed of before a major PR catastrophe, but Atlantis assures us that she is well and that in 3 months we'll have a full report from her radio-tag. Great. But come on guys - where are the pictures?

We hope Sammy is alive and well wherever she is!
Posted by Katie Shaver at 3:11 PM

Pssssst... I was in Atlanta yesterday and heard from a German tourist that the Atlanta Aquarium has a new whale shark (but he's still very tired from a long swim).