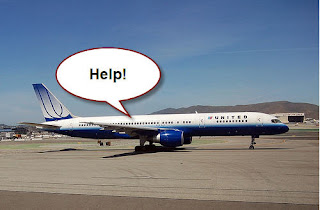 Yesterday was supposed to mark Katie's passage into American lobbying history, and my passage into the storybooks of bachelorhood.  So imagine my surprise when Katie, who was supposed to be on her way to DC, awakens me from my fully-clothed stupor on the couch at 4am.  Was the TV on?  Yes.  Was there an empty baskin robbins cup on the coffee table?  Yes.  Does every guy in the world veg out when their wife leaves?  They'll say no, but trust me - ice cream and bon bons all the way.

But the real story is the good, old-fashioned airline gripe session that followed.   Apparently, United Airlines decided that they could fly to the US, but had to fly far south, under Europe, to avoid the ash cloud.  If they were going to do that, they could a)  add more fuel to the plane, b) refuel en-route in Morocco, or c) kick off the heavier passengers.  Only kidding - they kicked of 63 skinny ones, including Katie.  Even a manager of the Dubai airport was overheard saying the number of ways he wished the United leadership would take a long walk off a short pier.

So, fellow stranded travelers, have no fear.  While I managed to make it to Turkey this week (via Amman - don't try that at home), United Airlines decided Katie (or more likely her luggage) needed to go on a diet, and they didn't feel like splurging for the gas.  And the best part?  She's been rebooked on her non-stop to Dulles - only this time, it's 2 days from now, and she has to fly through BEIJING (with a 7 hour layover).   Jon Stewart, where are you on this one?
Posted by Matthew Mueller at 11:32 PM

In Katie's case, the real weight saving for the airline is in kicking off her LUGGAGE.

Oops - I just remembered - my suits are in there, too.