DXB - IAD: Coming Soon to a Tarmac Near You!

Breaking news has emerged from the international travel world, in the new few months both Emirates and Etihad (Abu Dhabi's airline) will be launching direct routes to Washington Dulles International Airport.  I know that we are really becoming adults when we are able to get really excited about direct flight routes, other things that currently jazz us are low interest rates for refinancing, and a day with no rain to stain the deck of our home in PA.  Sigh.  Adulthood.

However, if you were to take as many 14 hour flights as we have taken over the last five years you'd see just why we are so grateful.  Current options for traveling home include 4 hour layovers in London which come with a courtesy frisking from the extremely zealous Heathrow airport security personnel, or a direct flight to New York city accompanied by a 100% money back guarantee of a screaming baby and then courtesy traffic from JFK to Penn Station to board a 2 1/2 hour train , or the delightful 'garden route' which involves a rental car and the NJ Turnpike - enough said.

I'm exhausted just thinking about it!  So the thought of stepping on to a plane in Dubai and directly off it in Washington into the waiting arms of the Mueller family welcome party within minutes of deplaning sounds pretty darn good!

So we were happy to oblige Emirates airlines with the filming of a promotional video for the launch of their new route.  Their marketing department contacted the American Business Council to seek Americans who hailed from DC and could talk about how the new route would impact them personally, as task that obviously wouldn't be to hard for Matt and I!

So for the second time in six months we welcomed a camera crew into our home for an interview - fun times!  We might be in a video in an Emirates flight near you! 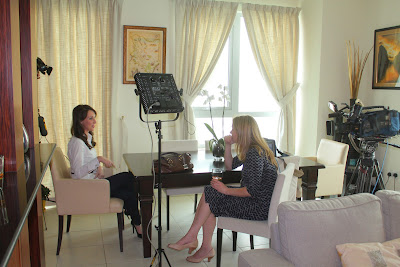 Trying to be as fascinating as possible! 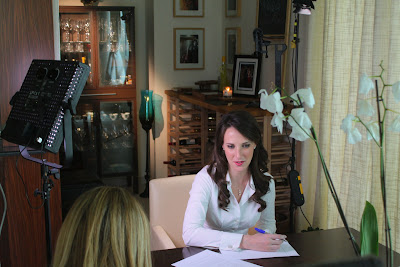 Signing away the rights to the footage - at least Matt didn't call me his "property" in this one! 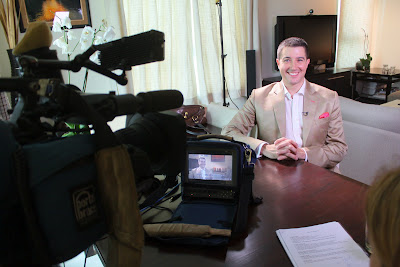 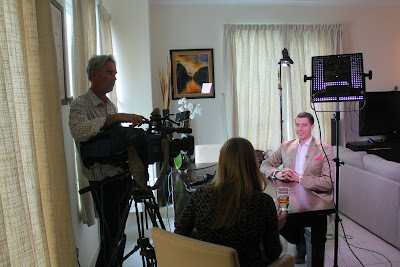 I'd buy an Emirates airline ticket off this guy - wouldn't you?
Posted by Katie Shaver at 2:58 PM