Kyoto is the crown jewel of Japan and one of the world's most culturally rich cities.  It's where you will find the Japan of your imagination: raked pebble gardens and bamboo groves, arcades of vermilion shrine gates, geisha disappearing into tea houses, and temples that float on water.  Kyoto has 17 Unesco World Heritage Sites, 1600 Buddhist temples and 400 Shinto shrines.  Most of the sites that make up the popular images of Japan are from Kyoto.

Here are just a few of our favorites. 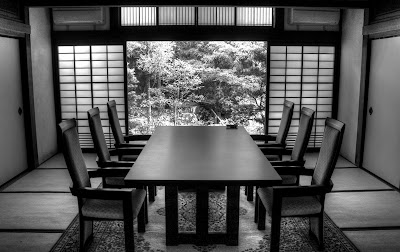 The formal dining room in the Nanzen-ji is a beautiful example of bring the outside in. 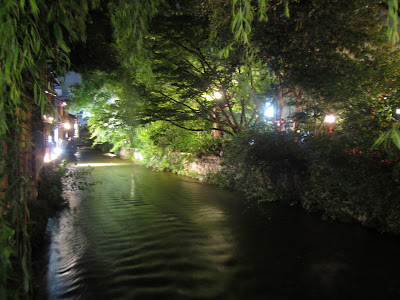 The evenings in Kyoto were simply stunning.  The weather was warm and it was a great time to stroll along the Shijo-Qhashi bridge and enjoy dinner on the water.  The lights twinkled on the Kamo-gawa and it has a great effect on illuminating the tea houses that hovered over the water 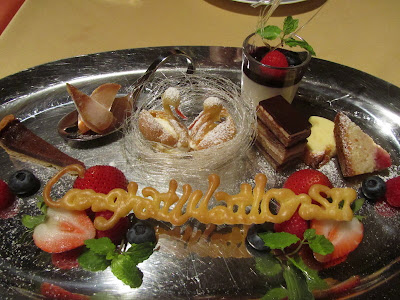 We celebrated our 2nd wedding anniversary while we were there and these was our divine desert! 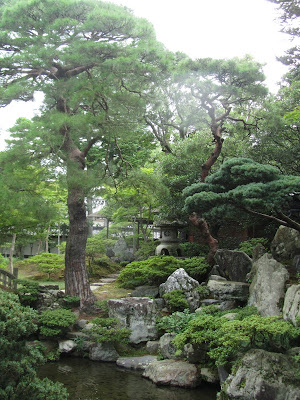 The zen garden at Kyoto's Imperial Palace was, you guessed it - zen! 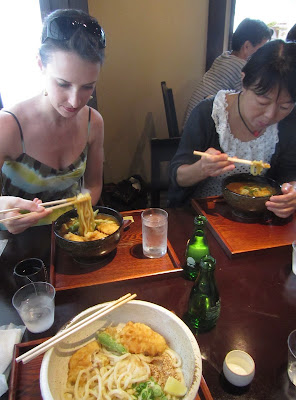 Our guide, Tammy,showed us the best udon place in town and  we learned all the tricks of chowing down the homemade noodles - slurping is not only tolerated but encouraged! 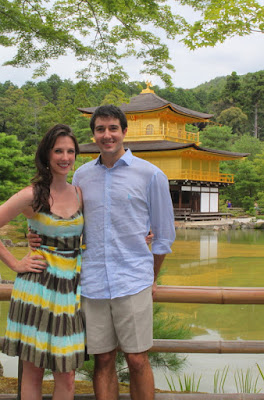 Kyoto's Golden Pavilion (Kinkaku-ji) was originally built in 1397 but in 1950 a young radical monk set fire to it because he believed that the temple would be most beautiful in fire!  This reincarnation was rebuilt in 1955 and it is completely covered in gold leaf from Kanazawa. 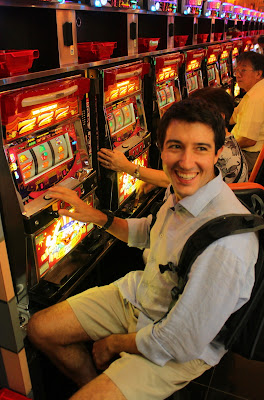 After cruising downtown I turned my back for one minute and Matt was gambling!  The Japanese are big fans. 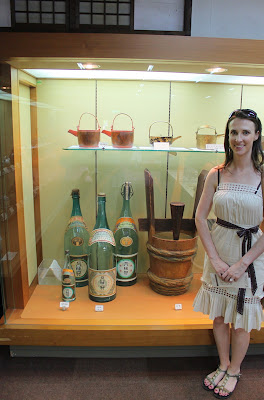 From one vice to another, we checked out the local sake breweries.  It was fascinating to learn about the process of turning rice into liquor.  It is a lot more complicated than you might think!  I'm standing in this picture just for scale - check out how big those special occasion bottles are! 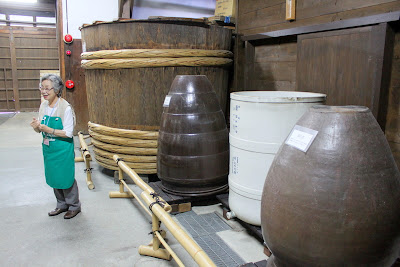 These are just of the varying jugs that they need to complete the many steps in making sake.  They are all bigger than her! 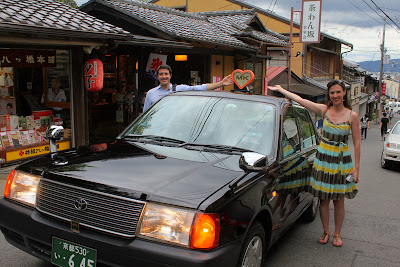 There were a lot of taxis driving around down with "M&K" in a heart on the top.  Apparently that is the name of the company, but I thought it was just a nice way to celebrate our anniversary! 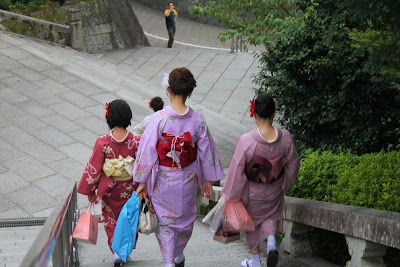 Not real geisha - but wannabe geisha.  Still love the outfits though. 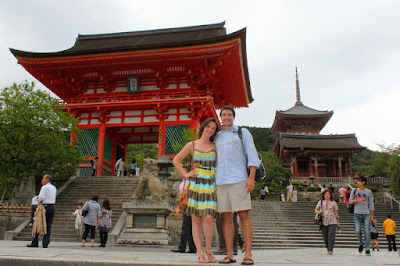 In front of the steps leading to Kiyomizu-dera temple. 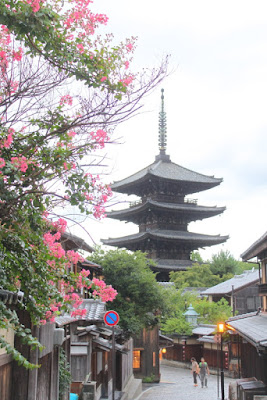 The old neighbors in Kyoto have lots of surprises. 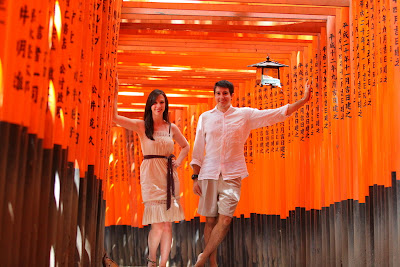 The Fushimi-inari Taisha has over 30,000 individually crafted vermillion torii.  It's like an optical illusion! 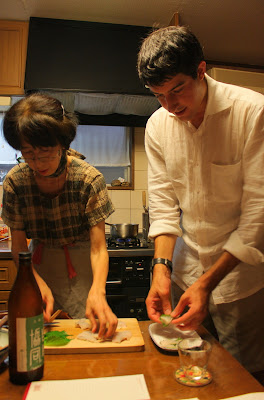 We couldn't have passed up a chance to learn a little about Japanese cooking and we found Emi!  She runs classes right from her own home in Kyoto and we had an amazing afternoon with her learning how to prepare rice and fish, tempura, and grilled veggies. 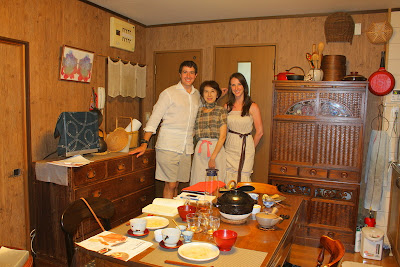 If you are ever in Kyoto make sure to visit Emi at www.kyotouzuki.com. 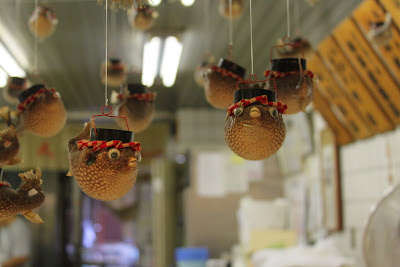 The puffer fish is extremely poisonous to humans, but the Japanese like to live a little dangerously and remove the poison and consume the fish (which can still end in fatalities if not done properly), I like them better with this friendly look. 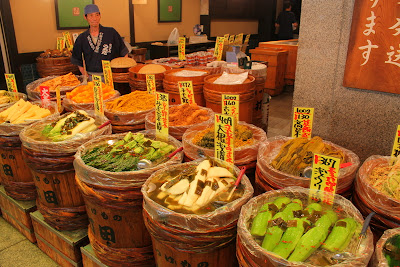 The Nishiki market was a great place to pick up anything your heart desires, fresh food is everywhere. 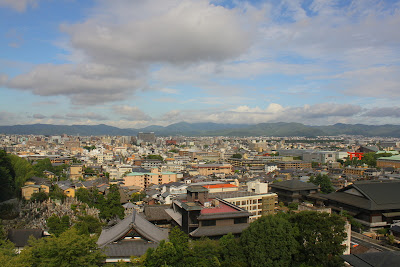 A parting view of Japan, Kyoto by day... 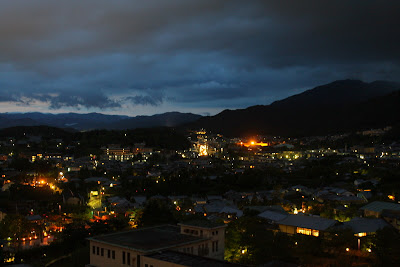 A very fitting final stop in Japan and obviously a great choice for your anniversary.

'Very surprised you didn't pilfer one of the signs from the M&K taxis!