How Tyra Banks Brought my Sister and I Together Again! (bet you never thought you see that as a title...)

It was like any old trip to the Du office, when the strangest thing happened. I looked up at the TV and there was my SISTER!
Let me explain. Yesterday evening Matt and I arrived at the Du offices. Du is one of the largest internet and cable providers in Dubai and you actually have to appear in person to apply for and receive service. (More importantly, why were doing this? Because we finally, finally have our apartment!) The place is set up exactly like the DMV. You pick a number, sit down in a hard plastic chair and thumb through the different types of television and internet packages you can purchase, until you are called. After Matt and I made sure our priorities were clear - which would you rather have Style Network or the History Channel? ESPN or BBC News? Do we really need SkySports, I mean how much cricket we watch? - we approached the counter (we of course got all of them, and much to Matt's delight, they tossed in a few free Russian language channels). Lucky for me our station was right below a flat screen TV running The Tyra Banks Show (we were there for almost 45 minutes), and as I look up at the show I see my sister Lisa plain as day on the screen!
This fall, Lisa obtained tickets to The Tyra Show and she and her two roommates took a day trip to NY to be part of the taping. However, you can imagine my surprise when 6 months later I am sitting in the offices of my Dubai internet provider at 8:45pm and I see my sister's face on television.
Lucky for me, I just so happened to be engaged to a very technically savvy man, who just so happened to buy a really expensive phone with a great camera in it (who would expect anything less?) and I was able to capture a few screen shots!
I really like the one where Lisa's face is just to the right of the advertisement on the screen which says that Emirates News is coming on next, also note the Arabic subtitles…should I cue the music to "It's a Small World After All" now?! 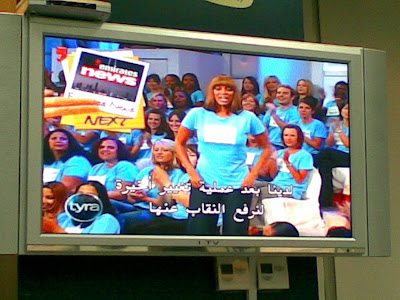 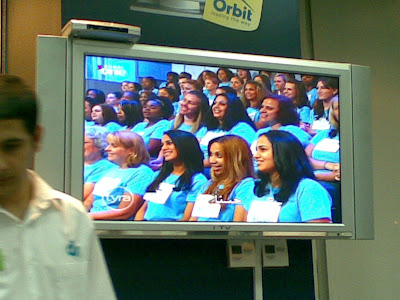 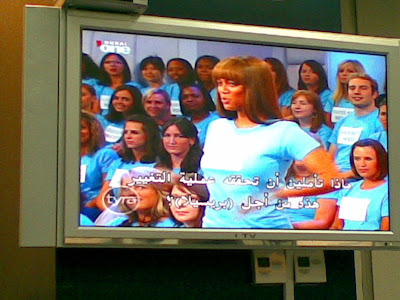