Capetown: Welcome to the Mother City

When ever we told people that we were travelling to Capetown the immediate reaction was "I've been dying to go there!", but when I would push further and ask why folks didn't seem to know specifically they just had  this sense that it was in a word - "awesome".

And their sense wasn't wrong thankfully.  As it turns out Capetown really does have it all starting with an unrivaled geography.  Capetown is the most visually stunning city I've had the pleasure of visiting.  The backdrop to the city - the azure blues of the Atlantic Ocean, cut by the rugged lines of Table Mountain, the lush green of Signal City and the ever present white mist tumbling down from Devil's Peak and rushing to fill the City Bowl are all so vibrant you feel like you must be looking at a green screen and not the real-life backdrop of a modern city.

Mother Nature alone would be enough to keep you occupied during your time (they do honestly experience weather changes like I've never seen, "four seasons in one day" my Capetonian friend has told me) but that won't be necessary because there is a rich (albeit often painful and storied) history complete with plenty of good eatin' and lots of activities.

The one thing I was often struck by in Capetown is the underlying sense of tension and struggle that belies a nation who is really quite young in her modern history.  It's only been 18 years since Nelson Mandela was elected and the country began to heal the wounds of apartheid, the effects of which run deep and still in many ways determine peoples lives.  Though it's heartening to know that the other feeling that runs as consistent as the tension is an overwhelming feeling of hope and optimism - that the only way forward is together.  And it's clear that the Capetonians, and all South Africans are committed to this path.  It's hard to ignore the stunning natural treasure in the land they all call home and I for one can't wait to see them emerge to become the nation they all hope for. 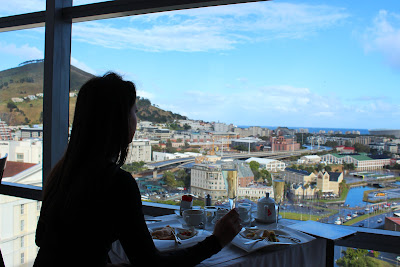 It's always a great start to the day when you wake up to a view like this over the Victoria and Alfred Waterfront, and Signal Hill to the left. 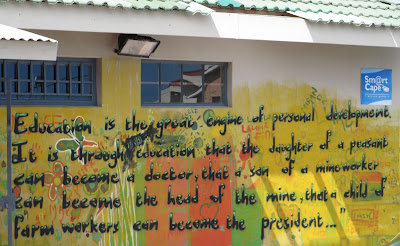 It was extremely important for me that we tour one of the townships in Capetown.  I've never believed in turning a blind eye to the plight of others even if I'm there to enjoy a holiday.  We found a great company that allowed us the unique experience of riding around the township on bicycle.

In 2002 AWOL Tours initiated a bicycle tourism programme in the Masiphumelele community of Cape Town in conjunction with the Bicycling Empowerment Network (BEN) a non-profit organisation.  This program evolved from BEN’s importation of second hand bikes and the establishment of Independent Bicycle Dealers (IBD) owned and operated by local residents.  AWOL’s guests hire bicycles from the BEN IBD’s.  Participating in this tour, spreads considerable financial benefit to the community.  Much needed income has been generated and put into circulation in the local township as part of tourism services and fees paid to business owners. 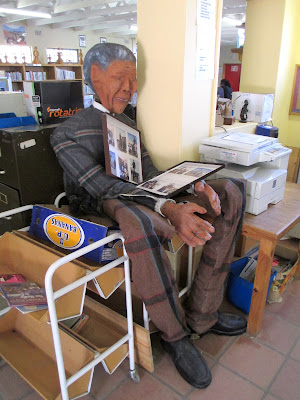 About 400-500 people first settled in the area in the 1980s during apartheid.  In 2010, the population was estimated at 38000.
Amenities are scarce, with an overcrowded school, no police station, and an understaffed day clinic, and it's estimated that 30-40% of the community are infected with HIV and/or TB.
But it's not without hope.  Initially known as Site 5, the township was renamed Masiphumelele by its residents, which is a Xhosa word meaning "We will succeed".  A fitting testament to their resolve.  (And homage to our buddy Nelson who sits at the local library). 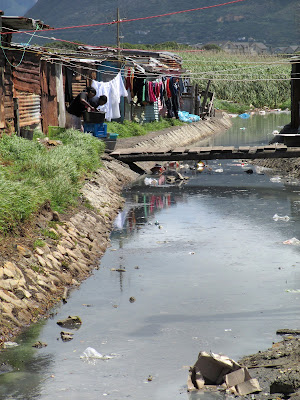 This area if known as the wetlands because of its propensity to flood often and bring water and mud ankle-deep into the houses. 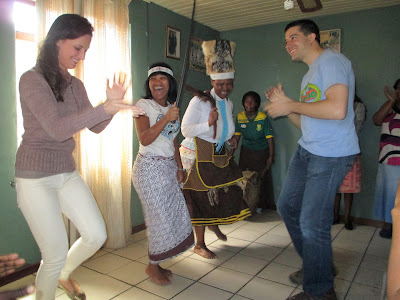 Our guide's mother is a traditional healer and her sister is training to be one (seen next to me) this dance was meant to summon the spirits of their ancestors and ask them to look after our marriage. 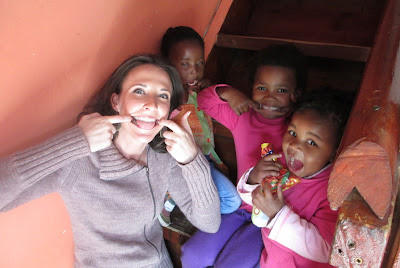 We stopped but a local house for lunch (lung and rice, not joking) but I did get to have these little treats for dessert! 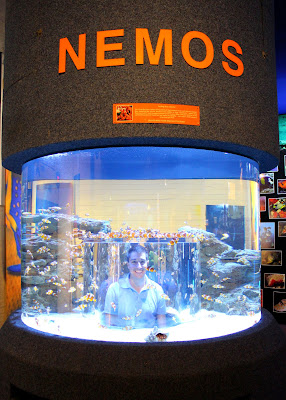 We can't miss the opportunity to swing by any aquarium, but this one gave us the added bonus of swimming with the "nemos".  Poor clown fish - will they ever be called by their rightful name again? 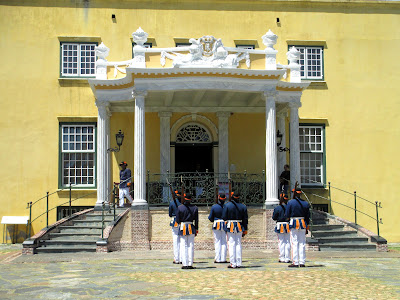 Built by the Dutch East India Company between 1666 and 1679, the Castle of Good Hope is the oldest existing colonial building in South Africa.  They still do a changing of the guard at noon. 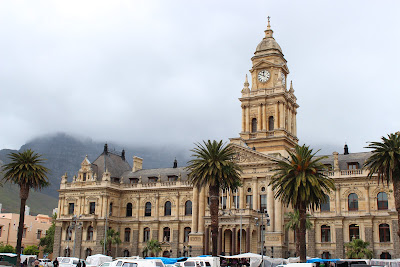 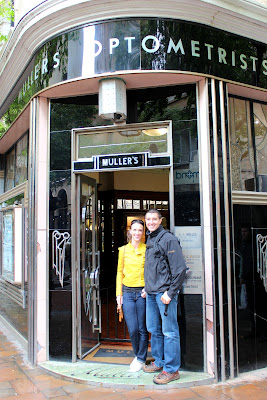 Dutch or German they still love their Mullers.  This is also notably one of the remaining art deco buildings in the city. 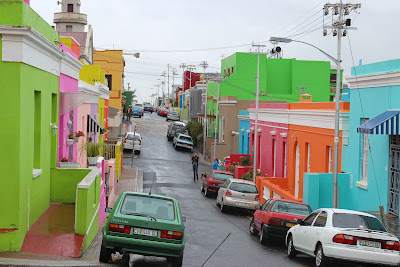 The Bo-Kaap is an area  formerly known as the Malay Quarter. It is quintessentially a township, situated on the slopes of Signal Hill above the city centre and is an historical centre of Cape Malay (Muslim) culture in Cape Town. The Nurul Islam Mosque, established in 1844, is located in the area.  It's also well known for it's beautiful colorful streets! 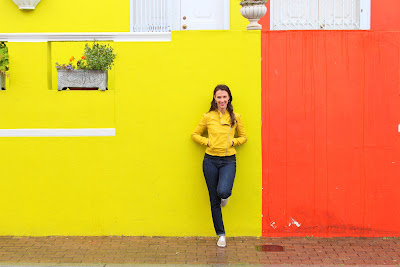 I must say I like to accessorize, but I really couldn't plan the fact that I would match the building! 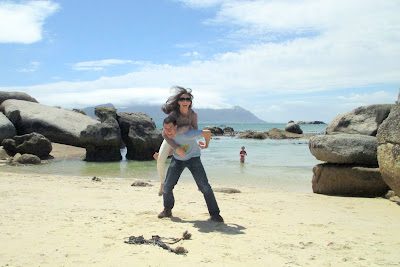 On our way to the Cape of Good Hope, we stopped to enjoy Boulders Beach.  Known not just for the boulders, but also for... 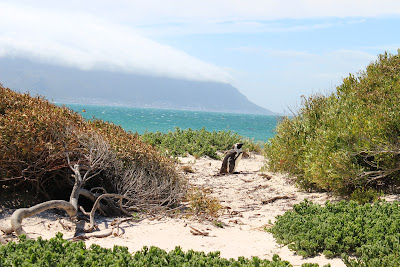 ...but the colony of penguins that live there! 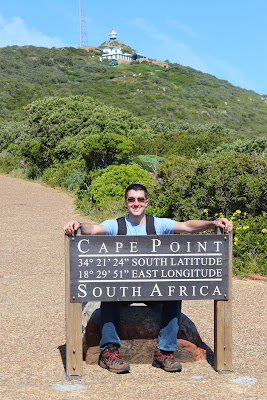 It's not the most southern point, but it's down there. 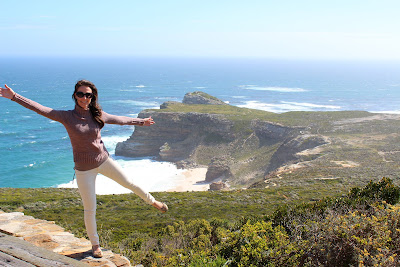 The freedom that comes with being at the end of the world. 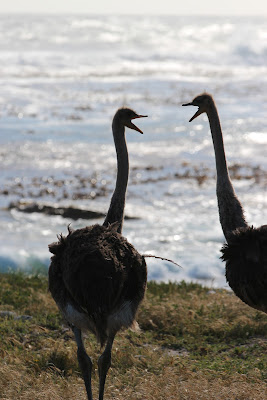 First time for everything - ostrich on the beach? 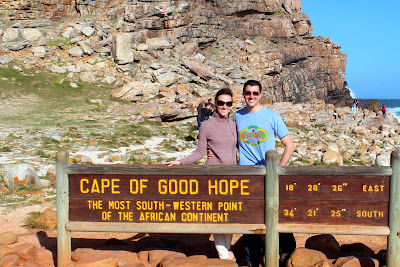 There's nothing 'good' about the Cape of Good Hope - sailors are terrified of her!  And with good reason, what you can't see in the picture is the absolutely wild gusting winds on the cape. 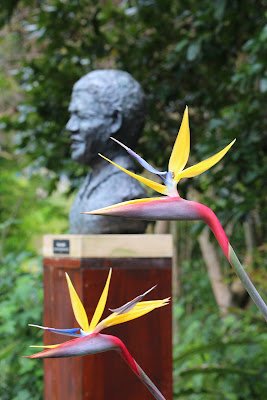 For those with a green thumb a visit to the Kirstenbosch Botanical Gardens is a must see.  Here are just a few of my favorite snaps of all the beautiful scenery there. 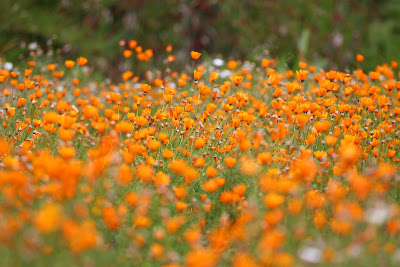 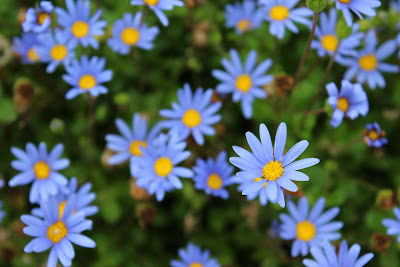 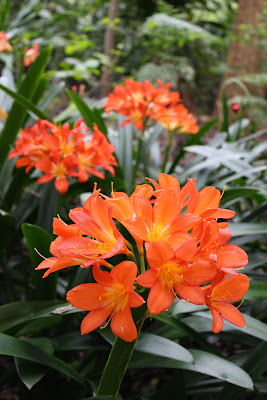 We also got a few pre-safari wildlife interactions.  This little guy's parents have chosen this high traffic area because apparently humans are far less scary than mongoose. 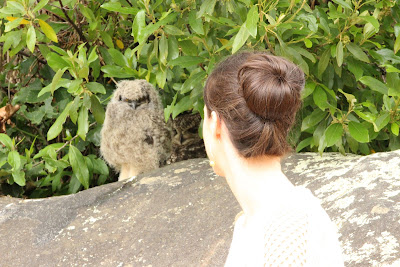 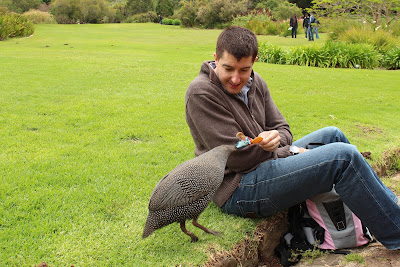 Matt learns that guinea fowl have a soft spot for his crackers. 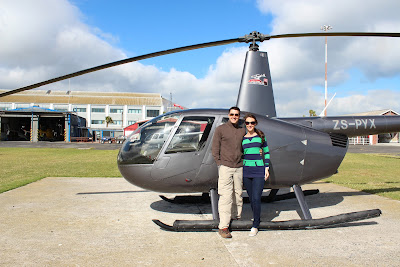 In the four days we visited Capetown we were unable to take the cableway to the top of Table Mountain due to high winds, so we did the next best thing! 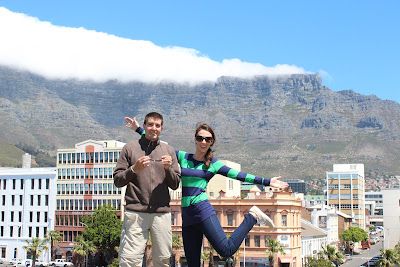 Sometimes you get a little antsy waiting for the self timer to go off!
Posted by Katie Shaver at 11:03 PM

Whew - a whirlwind tour and great photos! You really make us feel like we were there with you(without the shots, thank you)