I lost my RedBall in Abu Dhabi


Has anyone heard of RedBall before?  Well, I hadn't - so I thought nothing of the giant plastic toy wedged into the new Sheikh Zayed Bridge in Abu Dhabi.

Then it was on the Corniche, the road right next to the water.  What kid is so irresponsible as to leave his giant ball all over the city? 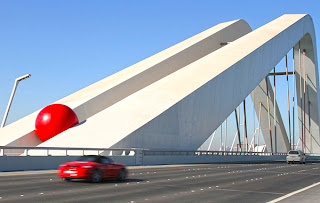 Apprently, Kurt Perschke is - and it's not just in Abu Dhabi.  He's been absent-mindedly leaving his ball everywhere - in major cities all around the world.  It shows up when anything interesting is happening - New Year's Eve, big elections, or in our case, the 40th Anniversary of the UAE's Independence in 1971.

In the artists own words: 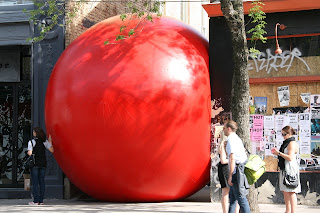 Appearing in entranceways, basking beneath bridges or wedged into alleyways, the irresistible RedBall sneaks into well-known places and half-noticed spaces, transforming the City into an unexpected canvas of possibilities. 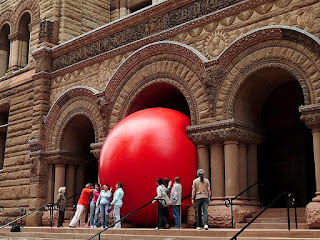 Photograph it, touch it or bounce against its slick soft surface. This award-winning project from New York artist Kurt Perschke pops up in 15 locations throughout the Festival, in Perth and the Great Southern. Keep your eyes peeled and your camera ready.

Which is precisely what happened crossing the bridge into Abu Dhabi.  Everywhere it goes, it takes on its surroundings - in this case, in true UAE tradition, causing rubbernecking and accidents on the highway!

Posted by Matthew Mueller at 3:59 PM

A very cool idea; makes you want to get inside and go down a long flight of steps.