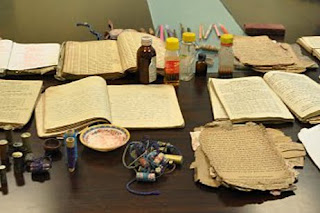 I'm the first person to stand up and say "Thanks!" when police uphold the rules of Four Square. No, not that one - the four square that involved a playground, a rubber ball, and definitely no smartphones. That's right - UAE rules include bus stops and unlimited bobbles, but definitely no black magic.

In this case, the Abu Dhabi police have laid down the law.  Since nobody tells a good story like the folks over at The National, I'll give them the floor:

Police charged a man today with practicing wizardry and to smuggle black magic devices and spells into the country.

Bl, 47, whose nationality was not given, was arrested at Abu Dhabi International Airport as he was entering on a work visa.

“The airport staff suspected the passenger, so they inspected his luggage and found books that contained spells, mostly in unknown languages, and some suspicious tools which seem to be used for black magic,” said Col Rashid Bursheed, head of organized crime at the Criminal Investigation Department.
The tools included water, pens, coloured ink, metallic rings, plastic and metallic needles, pieces of paper containing spells, threads of fabric, incense, perfume, glass and plastic plates, bottles and boxes, some of which contained liquids, herbs and oils.
The smuggler said the substances included saffron water to "treat" victims of black magic and to undo spells, according to police.
“He said he had been working in this profession for the past 30 years, since he was gaining huge sums of money and to help the needy,” Col Bursheed said. “He said it was his first time to set foot in the UAE, claiming that he forgot the equipment in his luggage because he was in a hurry to travel.”
The colonel asked the public to report any similar activities to the authorities to help protect those who might not know better.

Posted by Matthew Mueller at 12:13 AM

Maybe next time he'll remember to buy eye-of-newt in the 3oz. travel size.