Picasso and Chagall: Kiss and Make Up

It’s a shame that both Picasso and Chagall weren’t in attendance the art exhibition we attended on Thursday, because if they saw how nice their paintings looked next to one another they might be persuaded to end their feud. That, and they are technically dead, so I guess that would make a reconciliation difficult as well.

The Opera Gallery, in the Dubai Financial Center, did their best to bring together two of our talented contemporaries, with a beautiful exhibition entitled “Picasso-Chagall: the Reconciliation”. I’ll be the first to admit that I didn’t know a lot about our buddy Marc Chagall, but anyone with a Crayola 8 pack and a sheet of construction paper, has channeled Picasso, so it was his name recognition that got us excited about the event. Why, you might ask, were they trying to reconcile the two artists? I’ve pasted here a small explanation from the Gallery’s pamphlet:
“In 1910, Chagall came to Paris and had heard of Picasso, who was living in Montmartre at the time. He asked the poet Apollinaire to introduce him to Picasso. Apollinaire refused to do so and replied: “Picasso? Are you feeling suicidal?”
Initially, just before returning to Russia in 1914, Chagall had a great admiration for Picasso and did a drawing entitled “Thinking of Picasso”. But later on, he had produced another artwork named “Tired of Picasso”.
From the USA Chagall sent a letter to Picasso telling him that he would like to meet him. After the Second World War, Chagall came back to France and went to the French Riviera where he frequently met with Picasso at the Madoura ceramic workshop in Vallauris.
Picasso commented on Chagall’s work by saying: “When Chagall paints, you do not know if he is asleep or awake. Somewhere or other inside his head, there must be an angel.” Picasso also said: “When Matisse dies, Chagall will be the only painter left who understands what color is. His canvases are really painted, not just tossed together. I am convinced there’s never been anybody since Renoir who has a feeling for light that Chagall has.”
In 1954, the major break-up came at a dinner party, during which they had a fierce argument. Thereafter they never spoke to each other again and from that day, Chagall referred to Picasso as “the Spaniard” and even said sarcastically “What a genius Picasso is! It’s a pity he doesn’t paint.”
55 years later, Opera Gallery has decided to reconcile both artists in a joint exhibition in Dubai.” 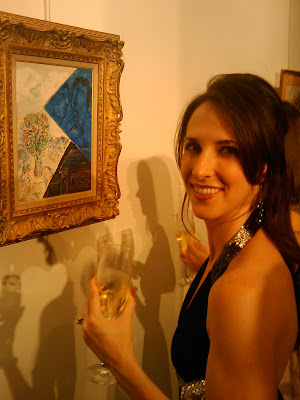 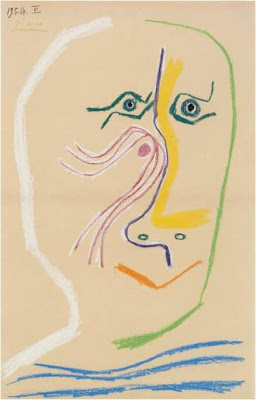 This was our favorite Picasso of the night 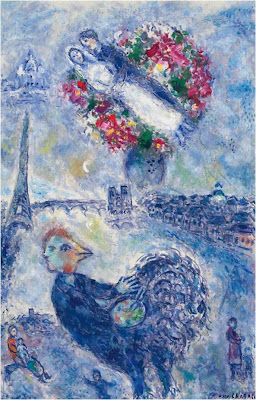 The Chagall we liked best

There were some really incredible pieces on display. In addition to the Picasso-Chagall art work upstairs, the gallery also had their entire bottom floor on display with many more modern works of art. Matt really took to the picture of Mao below, which was made up of a repeating 'AK47' pattern, where as I preferred the several hundred individually painted Marilyn Monroe’s that comprised a shadowy face of JFK. Matt asked how much it was and was told “oh, well this was going for $2,000 recently, but um….then the artist died and now Christie's auction house just sold one $80,000.” Man! Forget hedge fund managers, maybe artists should do a little death-faking. That’s a 40x mark up, people! 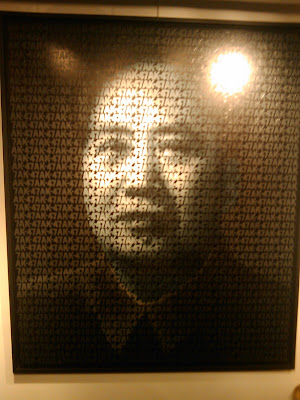 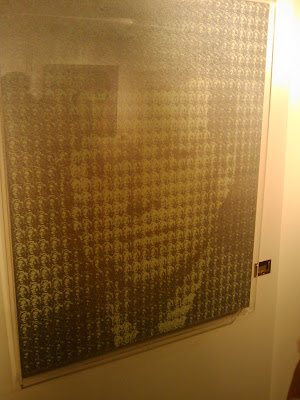 It's a little easier to understand why career artists seem a little off. With most careers, the idea is to make money BEFORE you die.

Great show - but please tell us Matt didn't buy anything!

I agree that Picasso and Chagall paintings look really nice together. It's no coincidence they were, in a way, big fans of one another. These Picasso ceramics are really nice. I would be thrilled to find some Chagall ceramics, if they exist.