Yummy, Yummy, in My Tummy!

Ever wondered what Dubai tastes like? Me too! Matt and I ventured to Media City on Saturday to the Taste of Dubai to sample the local cuisine. Actually, I mean, to indulge in every type of food but local cuisine. It is nearly impossible to find authentic local cuisine in Dubai, in fact, Matt and I were told the best place to find some would be to get ourselves invited to a local wedding. That is proving to be just a bit harder than making a reservation on OpenTable, but we are trying!

Nonetheless, everything at Taste of Dubai, was delicious! Once you enter you have to buy a ticket book of "dellas" (totally made-up food currency). The concept is really genius however, because it is designed to make you feel like you are spending much less than you are! Each "della" costs 5 dirhams, and each dish costs between 6 - 8 'dellas', so therefore each dish is nearly 40 dirhams, which for those of you who aren't Econ majors, is about $11 US. So here we are, just blissfully throwing down our 'dellas' with the psychological comfort of the single digit fee to sample each dish.

But, darn if they weren't worth it! Between the two of us we tried: Chicken Pechuga Pibil, Risotto Funghi e Rucola, Crepes Suzette, Ceviche de Hammour, Chocoflan, Tuna Carpaccio with Lobster and Avocado, White Tomato Soup, and Braised Beef. Don't judge us - they were small portions, I swear! All in all there were 14 restaurants represented, including Gordon Ramsey's Verre. I was really disspointed that he wasn't there, I wanted to see him go crazy on a few customers! The only thing we didn't indulge in was a glass of champagne at the bar, which was priced at 22 'dellas' per glass - you do the math. ($30/glass for those of you scoring at home). Yeah, that's right. 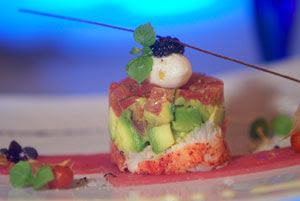 Most of the booths were actually being run by the head chefs, which was really cool. A lot of them were signing autographs and taking pictures with fans. There was also a Chef's Theatre, where each head chef taught a cooking lesson, a wine tasting booth, and a gourmet food market.
Matt and I agree that the winners on the day were the White Tomato Soup and the Tuna Carpaccio with Lobster and Avocado (pictured above). If you are feeling adventurous, all the recipes are on the website. Just be sure to invite me over for dinner when you make one!
Posted by Katie Shaver at 3:44 PM

I actually went to the website to check out the recipes thinking I might try some, but they're in metric! For a moment, I thought ok, I can do this until I saw these measurements:

Darn! I thought I might impress someone that I spent 2 hours on a Cook's Illustrated recipe for General Tso's chicken on Monday. I'm afraid I didn't use pc eggs, though - but does it count that Virginia went to Obama in the primary?