I'll Take What's In The Mystery Box, or "Don't Believe the Hype!" 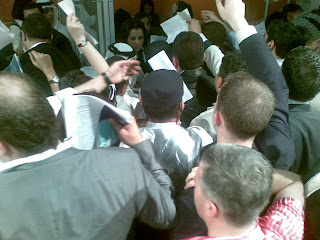 Bubble: n) A rise in the price of an asset based not on the current or prospective income that it provides but solely on expectations by market participants that the price will rise in the future.
Also, "Bubble" is the ninth single by the English electronic music band Fluke and was their only single released in 1994 (thanks Wikipedia!)
What are you seeing here is a property launch at 10am in Dubai for an apartment building in Abu Dhabi. An apartment building that won't be built until 2011. An apartment building where you have to buy units in CASH. A friend and I were looking to invest in this building, but when the crowd formed, everything broke loose. So much was the hype that people were actually TRAMPELLED just getting the form where you fill out your name and number to get a call back. Eventually, security was called, the crowds were dispersed, and the whole process shut down. Someone asked "Is this a good investment?", and the sales manager actually said "Are you gooding? Look at this crowd - of course it's a good investment!". Oh boy - enough said on that valuation. Enjoy the little lady trying to direct the crowd out of frustration:
Posted by Matthew Mueller at 2:33 AM