Dubai is a pretty nautical town, so it's not uncommon to be invited out on a boat for the day by friends and colleagues, but when the US Embassy asks you if you want to join them for a reception on a boat - and you find out that that "boat" is the aircraft carrier USS Stennis, you definitely say yes!

In honor of the Dubai Airshow being in town (check out "Boeing Secures Record Emirates Deal") there are a lot of government officials and current and ex military folks who have all converged upon our little city for the next week for all things - flight!  So Matt and I were pretty delighted to keep them company while we hung out on floating city that's over three football fields in length.  USS John C. Stennis (CVN-74) is the seventh Nimitz-class nuclear-powered supercarrier in the United States Navy, named for Senator John C. Stennis of Mississippi. She was commissioned on 9 December 1995.

Supercarrier?  I'd say so.  The experience of being on the carrier was like none other, because, of course, I have nothing to compare it too!  We had a great evening exploring the boat with our Navy escorts, who gave up their leave to attend as staff for the event.  It was all fun and games for us, but I have to say it really gave me pause to think about the men and women who live aboard that ship and the time they sacrifice with their family and friends to sail around the world doing good work for the US.  It made me very proud. 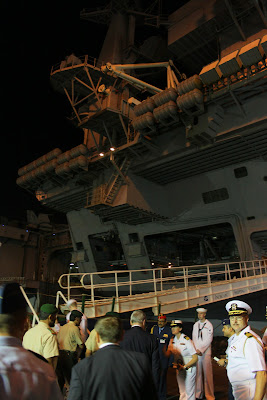 The ship wasn't too hard to identify in port - oh yeah, it was 10 times the size of anything around it! 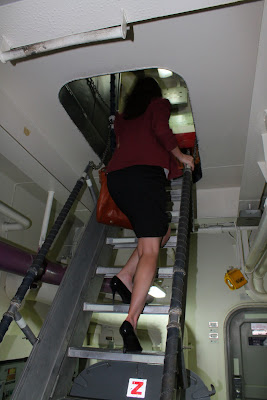 Matt thinks is this funny.  I didn't realize that I'd have to go below deck for the ladies room, and let's just say a pencil skirt and heels didn't make the ship too easy to navigate.  I wonder if they have any standard issue stilettos? 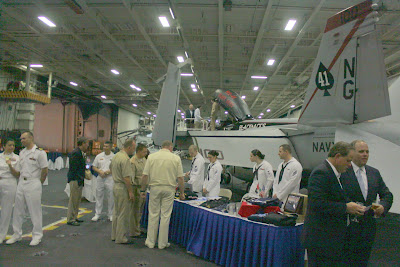 There were a lot of impressive guest in attendance including our own Ambassador and Consul General, and foreign defense ministers from the UAE and Italy (to name a few).  As an aside, I've never been called "ma'am" so much in my life.  A gal could get used to that kind of thing. 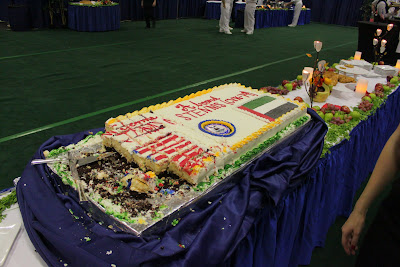 And there was cake.  Every hear the phrase "it's enough to feed an army?"  This was the Navy, but you get the idea. 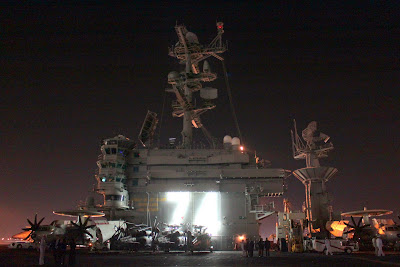 The Stennis broadcasts her identifying number for all to see.  Imagine my surprise when I thought carriers had around five to ten aircraft on board.  Yeah, it's a plane parking lot and I had no clue.  In this case it's the boat that make the planes look small. 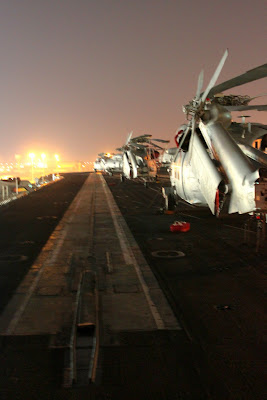 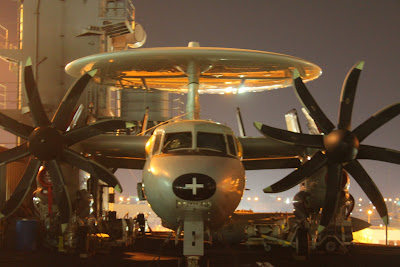 I asked Matt what this plane does, and twenty minutes later I was still learning about the nuances of radar. 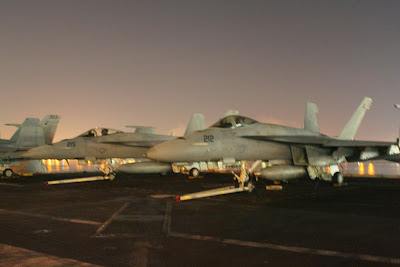 It was really cool to be able to go on deck to get up close and personal with the planes.  It was every thing I hoped it would be after seeing Top Gun. 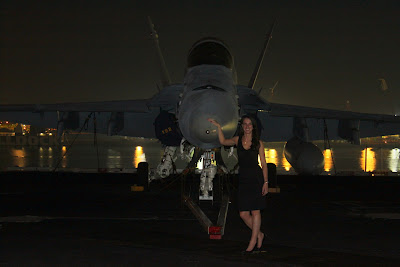 You can't see it in the picture but I'm humming Kenny Loggin's "Highway to the Danger Zone".

Go on you know you want to:

Now you enjoyed that, didn't you? 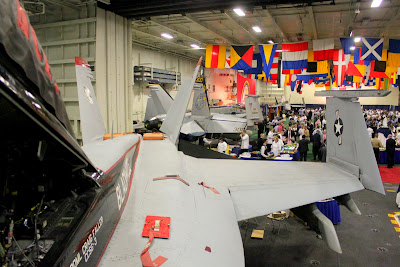 Oh yeah, the cool kids get to park inside of course, a dozen planes and 500 guests - no problem for a boat that can double as a basketball arena ("Hoop Deck"). 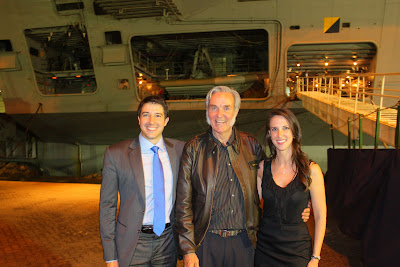 You never know when you are going to meet a hero.  (Check out Matt's grin!)  I was standing at the end of the gangplank thanking the sailors for a great evening when Matt took off from my side and ran, literally, after a side-burned man in leather jacket.  One minute later he reappeared and yelled "Katie come quick!"  He looked like a kid on Christmas morning and I couldn't imagine what had him so enthralled.  That's when I was introduced to Burt Rutan.  I can't say that I knew exactly who he was, so here's the wiki brief:

Elbert Leander "Burt" Rutan is an American aerospace engineer noted for his originality in designing light, strong, unusual-looking, energy-efficient aircraft. He is famous for his design of the record-breaking Voyager, which was the first plane to fly around the world without stopping or refueling, and the sub-orbital spaceplane SpaceShipOne, which won the Ansari X-Prize in 2004 for becoming the first privately funded spacecraft to enter the realm of space twice within a two week period. He has five aircraft on display in the National Air and Space Museum: SpaceShipOne, the Virgin Atlantic GlobalFlyer, Voyager, Quickie, and the VariEze.

Geez, why is this guy such an under-achiever? Matt's idolized him for a long time and this was an extra, extra, special treat.  He was a very friendly guy, for a total genius, and Matt was delighted.

Moral of the story, when someone invites on to an aircraft carrier, you say yes!
Posted by Katie Shaver at 1:23 PM

Loved reading your blog! My daughter serves on the Stennis & I enjoyed getting to see pictures of the ship from a different perspective.