When we first told people we were going to Japan, we got a lot of different reactions but the most frequent one was, "why now?". Yeah we see your point. They are suffering huge infrastructure damage in the North, still dealing with a radioactive melt down, and Tokyo is still experiencing tremors from the tsunami this March. The Imperial East has been on our wish list for a very long time and when saw how steadfast the Japanese were in the face of this disaster we wanted to make sure that our tourist dollars were put to good work. Sadly, all of the areas not affected directly by the quake and tsunami are also suffering from the perception that they are in the disaster zone - it's not so and I hope our accounts of being there paint a picture of the quiet, proud and resolute Japanese people who showed us experiences of a lifetime. Our guide in Kyoto said when the first tourists came back in June she burst into tears.  We were delighted to do our part to turn that frown upside down.

Let's start in Tokyo. It's everything you thought it would be and more: weird and modern, traditional and technological. When you step off the plane in Tokyo, you realize the joke is on you. All the weird and wonderful is just everyday to them, and at over 12 million strong, they get to write the book on what is 'normal' - not you. We spend most of our day in laughing fits over how out of place and ridiculous we appeared and acted. There's no 'blending in' in Tokyo, or Japan for that matter. It's the most homogenous place I've ever seen. Looks aside, there is also a uniformity of thought and action on behalf of the Japanese. No one ever crosses the street without a walk sign. Everyone stands to the right on the escalators (awesomeness). No one looks you in the eye on the train. And yes, everyone bows.  It was clean, orderly, polite, and efficient - a little slice of heaven for my Type A brain!

The fun started within the first five minutes in our hotel: 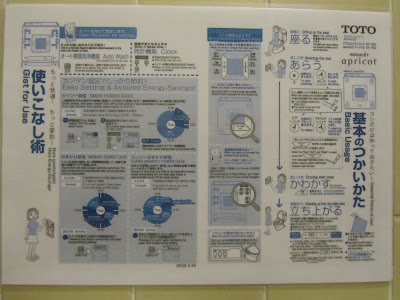 This is the basic owners manual for our toilet.  You thought going to bathroom was simple?  Just wait until you add UV light bowl color changing options, along with a fake 'privacy flush sound' (think about it), and the drying function.  I must say the overall experience is far superior! :)
Then it was straight to the Tuskiji fish market.  It is the largest wholesale fish market in the world, employing over 60,000 people and processing over 400 types of sea-products.  It is home to the famed tuna auction that happens every morning.  The highest price ever paid was $173,600 for one sushi-grade blue fin tuna.

Once the tuna is purchase it is cut frozen with huge ban-saws, watch those digits! 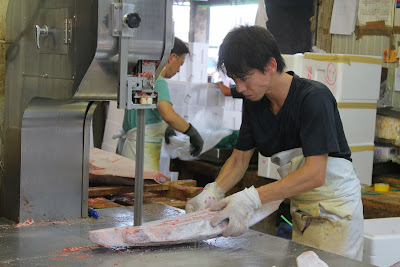 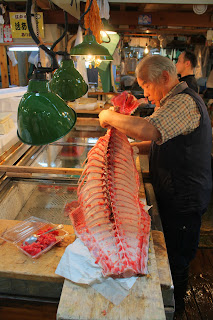 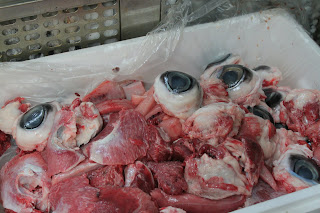 The only crazier than the size of the tuna is the size of their eyes - and that's a bucket of 'em!  Apparently the meat around the tuna eye is the most prized, and it's cut away leaving these peepers. 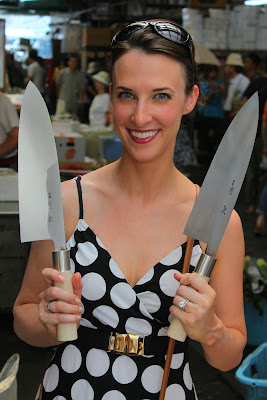 I couldn't leave without a few tools of the trade!  These babies cut through paper (I've been through a few reams already, it's just too fun...) 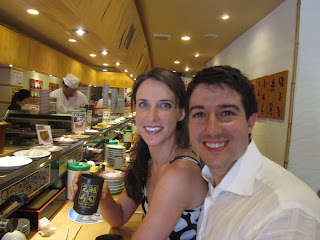 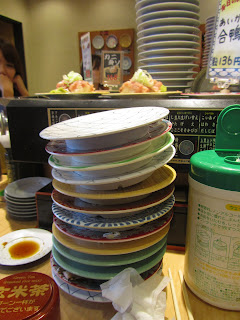 After seeing the fresh fish we had to try some, so we went to a traditional sushi counter lunch in Tokyo.  No English - just fish.  Point and eat, was the name of the game and it was absolutely delicious!  They charge by the plate so that should give you some indication of how much we liked it! 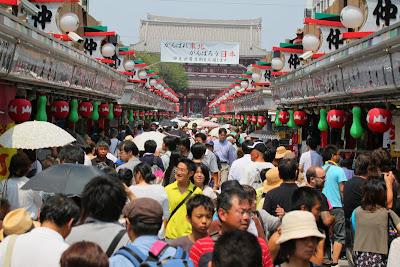 This is the road leading up to the Senso-ji temple.  We visited Tokyo during the Obon festival which honors the dead.  Its a chance for families to come together, and it also means that they swarm to see the same sites.  Our guide said that the Japanese have to value harmony and patience, because other wise no one would tolerate so many people in their personal space! 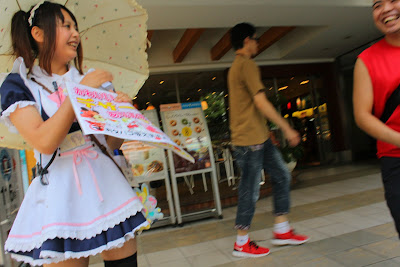 Nope it's not Halloween.  She advertising a 'maid cafe', which is a place were grown men pay a big cover charge to go in and have a coffee in a cafe, while these girls talk in baby voices and serve them children's meals while singing nursery rhymes.  It is weird!  The fetish is that many Japanese feel that childhood was the happiest time in their lives, before the pressures of working and supporting their elders, so they like to pretend they are children again.  Yes, we went to one, and yes, it's weird! 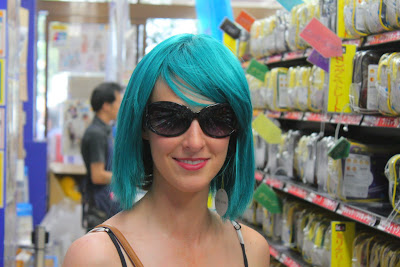 Naturally, I also needed to dress up.  We knew we being influenced by the culture when Matt and I actually liked this look. 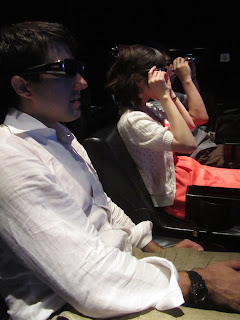 When I say nerd paradise, I mean it.  We then got to head to the Sony headquarters to test all of their beta stuff. 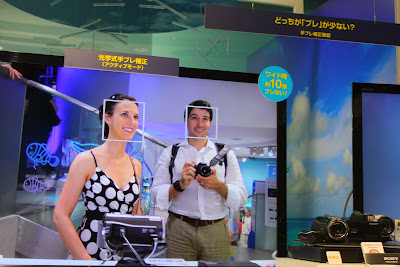 A picture of an LCD that is featuring a picture of us with facial recognition captured from a new video camera - I think we just entered a worm hole! 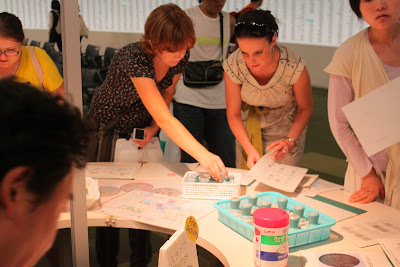 A serene moment at an odd time - at the Tokyo museum there was station where people were creating their own kimonos on paper with stamps of different designs.  I got in on the the fashion design!  It was great to see adults who were enjoying this art exercise - peaceful and contemplative and very choosy about the art they were creating. 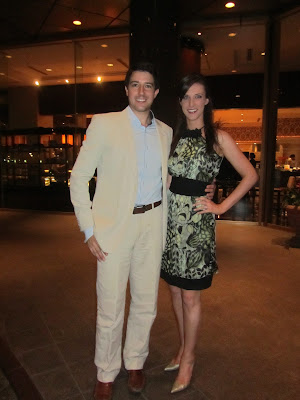 Getting ready for a night out on the town at the Michlein starred Chez Tomo.  It was divine.  The important thing to know about the Japanese is that the they love their food, and they also love a good challenge.  In their quest for mastery of any subject - especially cooking - they become passionate experts of french cooking and great chefs! 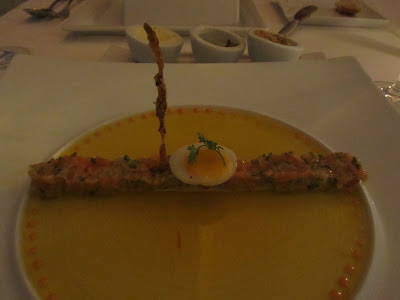 This is what salmon tartare looks like at Chez Tomo. 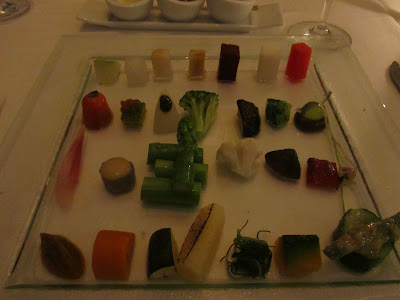 The deconstructed 'salad' course and yes, I ate all my vegetables! 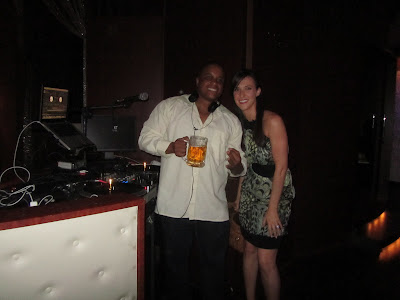 We went to a hot spot in Ropongi Hills and this bar was playing some great old school hip hop.  I promptly entered and found my way to the DJ booth to commend him on his style.  He's from Brooklyn - of course! 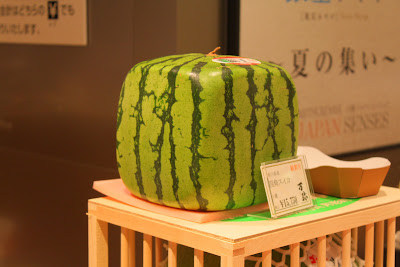 We went shopping in Ginza and they have everything, even square watermelons, for the bargain price of $1000! 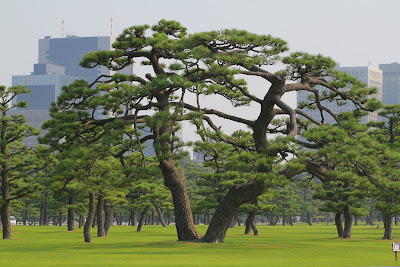 The imperial Gardens, a lot more structured than your average pumpkin patch. 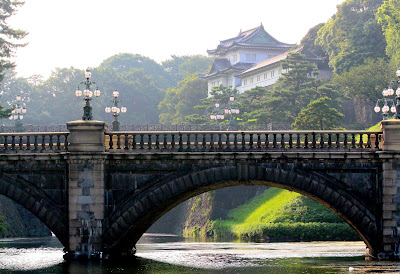 A beautiful view of the Imperial Palace. 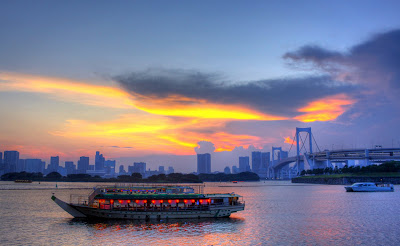 We took a dinner cruise on Tokyo bay for our final night, and we were treated to a beautiful sunset! 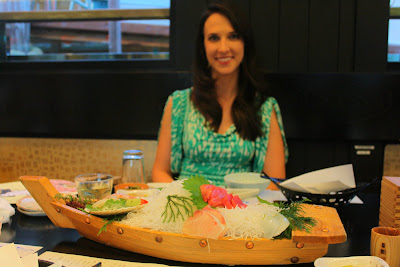 Yeah, there are some thing on that sushi boat that I simply cannot verify...some went down easy, others were a bit more difficult to get down! 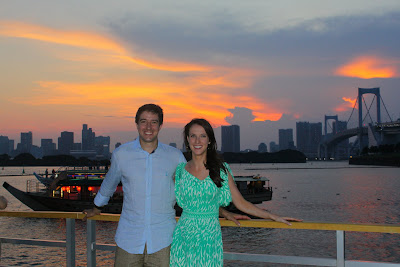 The summer evenings were really incredible in Japan, and especially beautiful on the water. 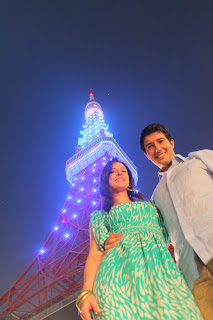 What is the Eiffel Tower doing in the middle of Tokyo?  The tower was built in 1958 using the same designs as the famous landmark in Paris.  It doesn't have nearly the majesty of it's sister tower, but it provides a great view of the city - and it's 13 meters taller than Eiffel.  I told you they are competitive! 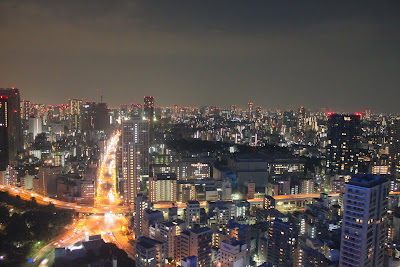 Wonderful commentary and photos! It makes me want to go back right now...and bring back a square watermelon. I hope that for $1000, at least it's seedless?

Hy,
It looks like you had a good time in Japan.I've been visiting your blog for a year now....just didn't have the guts to say a word.
I am always waiting for the new posts.I enjoy seing the world through other peoples's eyes.
Good Luck!!!!