The Daily Local News in Dubai (Who Would Have Thought?)

Lisa and I got a special treat earlier this week as we sat down with a reporter from our hometown!  The Chester County Chamber of Commerce decided to take a trip to our little Emirate to see what all the hub-bub was about and one of the members is a reporter  for the Daily Local News.  After we sat down to lunch with him for a few hours, we were thrilled to find out that our story was slated for the front page of the business section yesterday.  How exciting!

Or just scroll below...

For two Coatesville-area sisters, the road to Dubai has been a long and sometimes rocky one.

Long, because Dubai is far enough away from Chester County that Lisa Shaver missed her 22nd birthday while on a flight to the Middle East emirate, one of seven that comprise the United Arab Emirates.

Rocky, because of the timing of her decision to join her sister, Katie, who forged the path to Dubai with her husband, Matt Mueller, after he had taken a job in the emirate with Harvard Medical International.

When Lisa arrived in August 2008 shortly after graduating from Temple University with a marketing degree, Dubai was still a boom town with little warning of the financial meltdown that was about to take place, the sisters from West Caln recalled over lunch in Souk Madinat marketplace in the city on Friday. 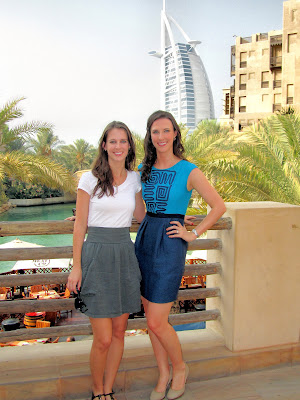 Lisa, 24, began her career in Dubai selling advertising for an English-speaking women's fashion magazine when the market was still strong.

She went home that Christmas and when she returned things had changed.

The global financial crisis had hit, and Dubai was right in the middle of it. Projects that were going gangbusters crashed to a halt, and Katie Shaver had an uncomfortably close, front-row seat for the events that were about to unfold.

Katie worked at Tatweer, a subsidiary of Dubai Holding, the company set up by the government of Dubai to manage its assets and investments.

Katie said she was thrilled to become head of communications for the executive chairman's office, especially since she arrived in the country in January 2008 as a trailing spouse. In Dubai, she explained, it's hard to land a job without contacts, even more so than in other countries.

"For three or four months it was really exciting, this was the company building Dubailand, Universal City and the Tiger Woods golf course," she recalled. "I worked in an office (in Dubailand) where you would walk into the building and there were two live Bengal tigers there."

Katie started her job at Tatweer in May 2008 and was caught up in the country's "huge plans."

Then, January 2009 brought the financial crisis to her doorstep with revelations that many of the projects were severely overleveraged.

"2009 was the lost year for companies in Dubai," Katie said. "It was no longer fun to be the top communicator. It went from fun to how do you most appropriately write a redundancy letter."

The U.S. equivalency for redundancy letters are pink slips.

"That was difficult," said Katie, 28. "My role had always been to be creative."

And, the ramifications of unemployment in Dubai are far greater than in the U.S. or other Western countries.

Employment laws in the United Arab Emirates require dismissed foreign workers, who make up the bulk of the UAE's workforce and who are known locally as "expats," to leave the country within 30 days following the termination of their employment visas.

Expats make up roughly 85 percent of Dubai's overall population, and the Shavers say nearly all contact the public has with workers in places like restaurants and hotels as well as other private businesses are with foreign workers. (The locals, or Emiratis, work mostly in the government, which is why Katie had a different experience from most expats in working with Emiratis at Tatweer.)

"I haven't worked with a local since I got here," said Lisa, who changed jobs in January and now works for Explorer Publications, which puts out guidebooks, maps and other products for expats working in or traveling to the UAE. "I've never had a conversation with a local. Here, you only come across people who are not from here."

The foreign worker situation is one of the differences the sisters see in doing business in Dubai, but far from the only one. Take the job interview process, for instance.

Employers can ask prospective employees questions that would be unlawful in America, including whether they're married, their religion and whether they plan to get pregnant.

"That was a big shock for me," Lisa said of the process.

"The interview process is a no-holds-barred process here, that's for sure," Katie concurred.

When employers advertise in publications, they can specify what age and gender they are looking for in the job seeker and can state, "Locals Only Apply."

TEA AND A MEETING

Another difference is the overall business culture, the sisters said. Traits coveted by U.S. employers — being a straight-shooter, a multi-tasker and highly efficient — don't translate in the emirates.

"Punctuality is not valued at all," Lisa said. It is not unusual to wait 45 minutes for a meeting only to find out it's been canceled, she added.

Instead, relationship-building is the key component in doing business in Dubai.

"Once you know that, then you can adapt to it," Katie observed.

Another cultural change for foreign workers is working within Muslim guidelines. Five daily calls to prayer are observed by everyone — non-Muslims take discrete breaks during the observances — and the month-long Ramadan observation means restaurants are closed during the day. 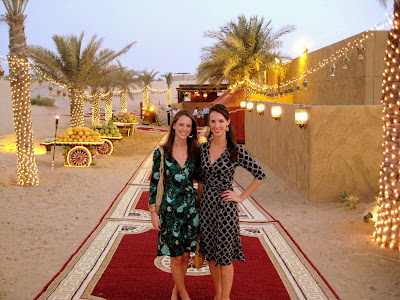 Dubai has big advantages, the Shavers said. It serves as "a jumping-off opportunity" for travelers. Katie recently returned from a two-week vacation to Southeast Asia while Lisa visited Jordan and India during the summer.

The country is also extremely safe. Crime is rare. The sisters believe the reason for that is two-fold: the punishment is tough and expat workers can't afford to be deported, which would be automatic for someone found guilty of a crime in Dubai.

"They are supporting a huge amount of people back home, they can't take the risk," Katie noted.

The sisters aren't sure what the future holds for them in Dubai, but say they've learned a lot from the experience of living in the emirate.

Katie, who left her job at Tatweer in January, is doing sales and marketing consulting. She also spends a good deal of her time as a board member on the American Business Council of Dubai and is earning her master's degree in political management from George Washington University. She believes she'll be returning soon to the U.S.

Lisa said there's a "three-year itch" when it comes to living in Dubai. If she does leave, she'd like to move to another foreign country.

"Once you return to the United States, it's tough to leave," she said. "New York would be the end game."

Recent government reports indicate Dubai's economy is bouncing back — and the sisters each said that's their impression, too. For Lisa, advertising is improving at her publication while Katie has another barometer: For the first time since the financial crisis hit she made a dinner reservation last week. During the crisis, reservations weren't necessary, but recently they've been filling back up. 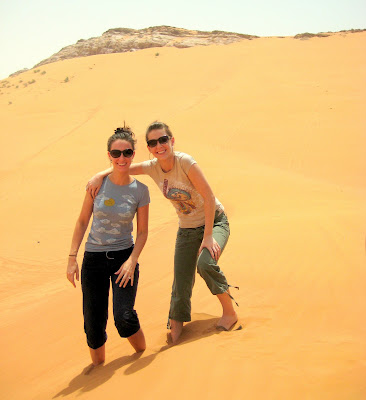 Great interview - You two could become the spokesteam for Dubai!

This was a really helpful blog. I'm actually visiting Dubai for 2 months in April in hopes of securing a role in HR - Comp and Benefits. I have international experience (but not in the ME) and I'm interested in change, and utilise my skills in Dubai.

A few years on, any hints or tips on this relocation?