Japan loves all things seafood - and aquariums are no exception.  We found very modern and well-stocked exhibits across the country - in Osaka (one of the most famous), on a tiny island off of Hiroshima, even in the Sony discovery museum.  They have everything - whale sharks, robotic fish, oyster farms, and stone crab tank that was more like watching a UFC championship.  But hands down, the weirdest thing we found was this nasty crustacean.  About a foot long and looking like just the tail from a lobster, these things seemed boring at first.

But then we got a close up look: 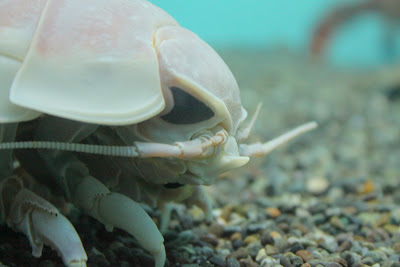 Its eyes were straight out of an Oakley catalog, and the face was a cross between a horrible insect and Darth Vader.  With tons of legs capped with claws, it was freaky to watch, even through 3 inches of plexiglass.  And you thought bedbugs were bad!
Posted by Matthew Mueller at 9:55 AM