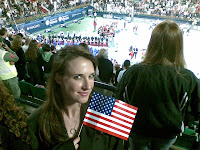 nce to see an actual tennis match! In keeping with our current tradition of attending sporting events where you have to wear a collared shirt, Matt scored us tickets to the Dubai Tennis Championship final between Andy Roddick and Feliciano Lopez. Dubai has built a fantastic tennis stadium which is actually quite small, the whole set up makes you feel like you are right next to the players (mostly because you are!). The match was awesome, really exciting, and the place was just charged with energy. When you walk in the ushers actually give you an American flag and a Spanish flag so you can decide who support. 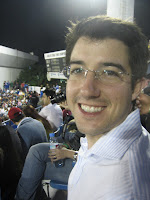 One thing I didn't know is that you are supposed to be dead silence and not move during game play. People would get up to go to the snack bar and not return for 30 minutes because they weren't allowed to walk-about during play. In one hilarious incident, the whole stadium was seated and the game was about to commence when the head referee gets on the microphone and says "excuse me, please, take your seats". Everyone scanned the stadium and realized that his comments were directed at the luxury box where the Sheik's cronies and a bunch of top UAE government officials were just strolling in and chatting like nothing was happening. The audience started laughing and cheering, because in no other forum is it ok to tell an Emirati what to do -but in tennis the rules are the rules.

Andre Agassi was there too, and they showed him a few times on the big screen. He was easy to find - sitting courtside, shiny bald head, huge arms. Once after a Lopez scored a point and his supporters were going wild with the whole "Ole, Ole, Ole…" thing. (Seriously guys, that cheer has already worn out its welcome in soccer (aka. Football) do you have do to it at tennis matches, too?) The referee got everyone quieted-down and right before Roddick's next serve someone yells from the side "Come on, Andy. Come on!" It was Andre Agassi! Talk about motivation, even I could ace a serve if Agassi was cheering for me! Ok, probably not, but you know the feeling.
In the end Roddick won, it doesn't hurt that he was serving at 140mph! Although, I feel bad for the guy. More people care more that Federer got knocked out in Round 1, than they do who won! Andy said some nice things about Lopez, at the end, and was given his prize by Prince Hamdam, the son of Sheik Mo. The match was great, hopefully it will be the first of many! 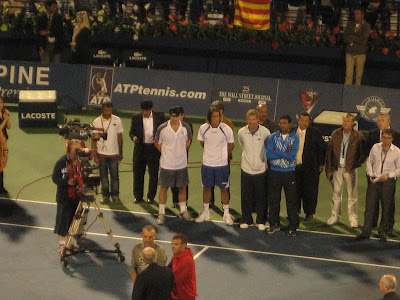