There are a lot of great events that happen during the fall and winter, when the weather turns nice and everyone heads outside to enjoy the seasonal festivities.  However, Thanksgiving is sadly not one of those events.  People get jazzed for Christmas, heck they even like the Fourth of July (all that BBQ) but unless you find yourself an American enclave and bag of Pepperidge Farm stuffing then the day can slip by with very little notice.

For starters it's a work day here, so the holiday mood can be challenging when you wake up at 7:00am to hit the office.  My feeble attempt at some Tday cheer was a hot cup of cinnamon tea and a nutri-grain apple bar - mmm, apple crisp (sort of).  Matt and I had hummus and pita with halloumi salads for lunch - no turkey there...and I was just beginning to give up hope of properly celebrating one of my favorite holidays when our friends John and Lynze used their powerful Americandar - it's just like radar but for Americans (my battery must have been low)!  To find out that the organic food restaurant next to our apartment was indeed making some festive treats! 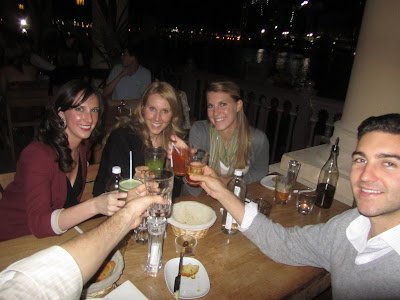 Yes, that's Matt's arm participating in the giving.
Yearning for any semblance of the Thanksgiving spirit we joined them at the restaurant, who has the notable distinction of being right on the water where the fountains perform - not bad if you don't have football to watch - and a list of tasty tidbits just for the holiday. 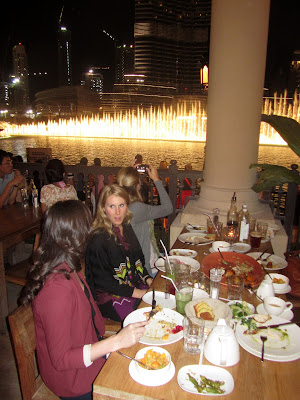 Yes.  Apparently Baker and Spice are so true to their organic mission that they would not serve turkey because they were unable to find any organically raised, so chicken was the order of the day.  At that point my heart was yearning for turkey so bad I didn't care if it was raised next to a nuclear power plant - but  I commend them to sticking to their guns (sort of). 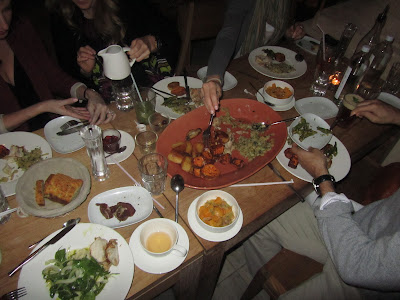 So chicken with all fixings it was to be.  And because our meal was a bit non-traditional so were the thanks, we all decided to talk about a technology that changed our life - contact lenses, flight, and electric tea kettles were the order of the day. 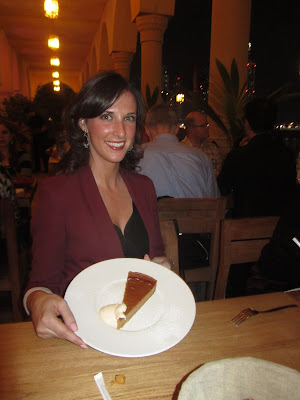 I thankfully was able to find some pumpkin pie!
But I'll say this now, I'm making a plea for a Christmas turkey - hold the ham this year!  I'm way under my quota now and I'm a pretty angry bird if you know what I mean!
Posted by Katie Shaver at 6:10 PM

And we thought it was US you missed!

You'll be thrilled to know that those inventive Honey Baked people plan to have their new Hamkey ready for the Christmas holidays.

And wait till you see the drumsticks!