Every morning I wake up and think of my mantra - WWJD - what would Jackie do?  The epitome of high-style, grace and poise, I like to channel her when I throw on a pencil skirt for work, or attempt to bring wearing a hat in public back in fashion.  Jackie O aside, I love the swinging sixties look, which is why I was jazzed to receive an invitation to a Mad Men Affair party this weekend.  I immediately found my teasing comb and gloves, while Matt pulled out the grey suit (it really helps to own your own suit making company) and skinny tie avec tie clip, of course.

While I don't really look like any of the Mad Men gals I was hoping to embody the style of Betty, the assertiveness of Joan and the brains of Peggy, and Matt - he just actually makes a pretty good Don Draper, lucky him.  We felt very chic as we left the house and then quickly realized that we might have looked a little out of place when we stepped directly into a crowded elevator!  27 floors later (and a few weird looks) and we were at our destination.  With a martini in hand, we joined the rest of the Mad Men fans and had a great night.  Hot topic of the night  - who are you going to vote for Kennedy or Nixon? 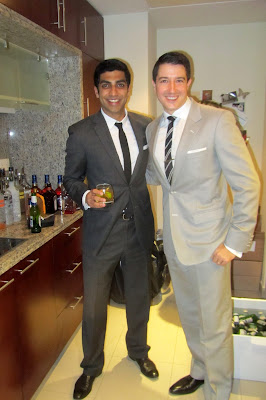 Our host and the man of the evening - Rooman "Draper" 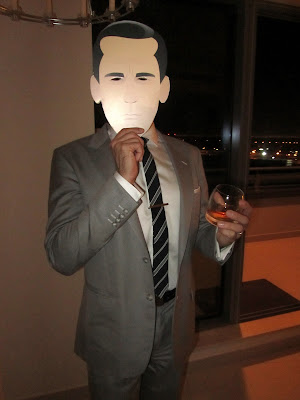 Don, is that you? 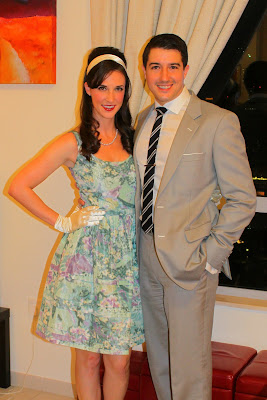 Stepping back in time for the night.
Posted by Katie Shaver at 11:16 PM

'Looks like a great party - but where are all the chain-smokers?