What is there to say about Angkor Wat?  It's absolutely astounding and breath taking and it's hard to believe that no one from the outside world knew it was there until a little over 100 years ago.  Angkor Wat is consistently named one of the 7 (Forgotten) Wonders of the Medieval World.  Construction of all the temples spans more than 600 years from AD 802 to 1432 and they really are a sight to behold.  There's alot of history to share - so read more about Angkor Wat here!

When the first explorers in the region found Angkor Wat it was apparently completely swallowed by the jungle.  What you see today has been cleared and rebuilt, but they've left a few in their natural state so you can get a sense of what they were up against and what a number the jungle was doing on the structures.  Walking amongst the temples you really do get the feeling you are some place other-worldly and that if these walls could talk they'd have seen some incredible things... 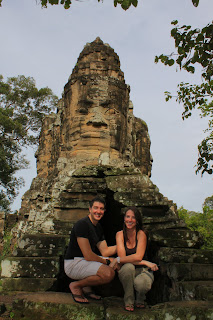 At the gate entering Angkor Thom 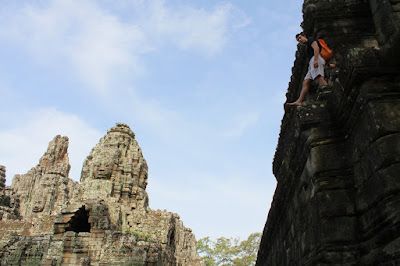 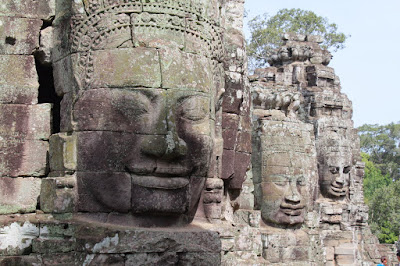 The faces of the Bayon Temple in Angkor Thom.  There are over 216 faces serenely smilingly at you from all angles, you can't go anywhere without them having their eye on you! 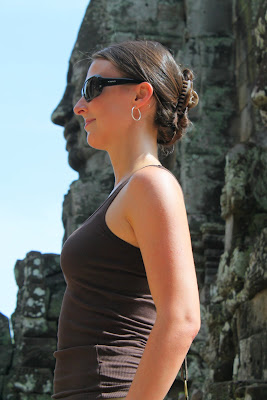 Maybe we are related? 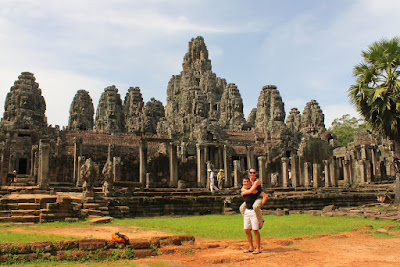 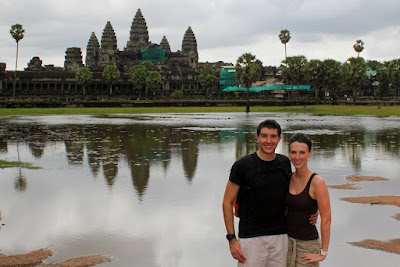 The main event!  Angkor Wat!  The only view where all five spires can be seen. 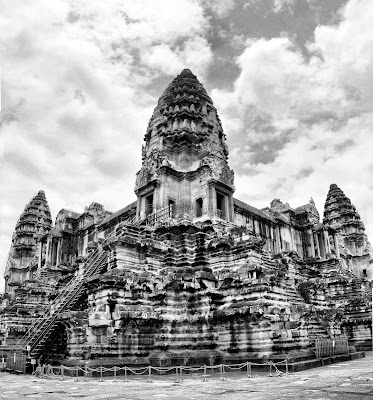 At the top of Angkor Wat.  You used to be able to go to the very top but after 3 people fell to their deaths in 2005 the government closed it. 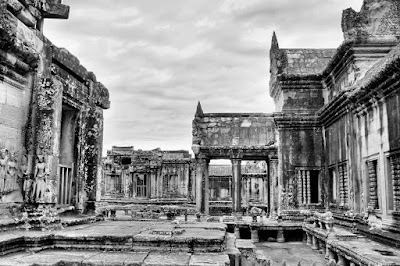 She looks great in black and white. 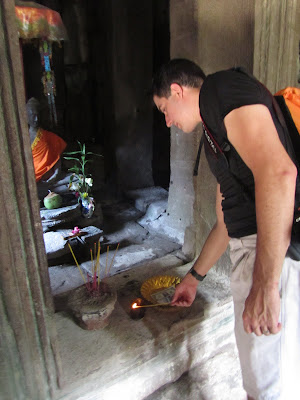 Matt makes an offering to Buddha for good measure. 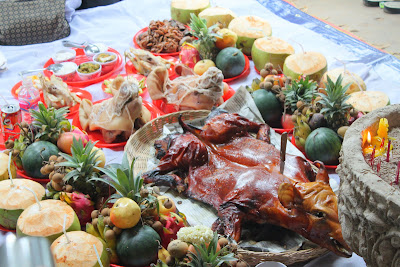 Now this is an offering.  This was a ritual for believers in Animism, which is a belief in Neak Ta, a "mother earth" concept.  Anything that can be seen as a link between the people and the fertility of their land is considered holy. 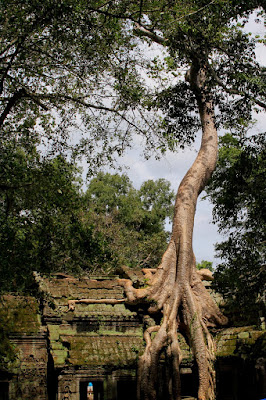 This is apparently closer to what the original explorers saw (in fact we are told that even this is cleared of the brush and vines but the big trees have been left).  This is Ta Prohm or as the locals call it the "Tomb Raider" temple.  As you can see the trees look like they are just devouring the ruins. 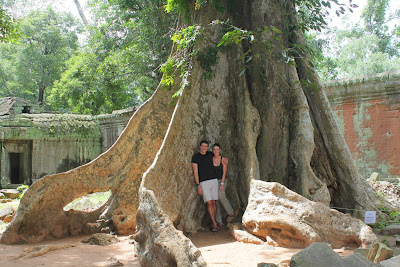 Huge jungle trees - I felt weird getting close to them as their take over of the temples just looked so primal!  It felt like they could reach out and grab you too! 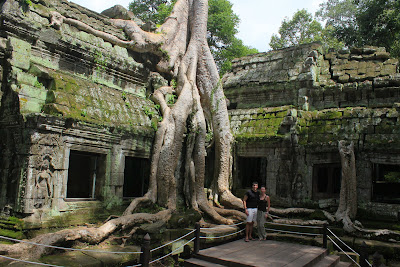 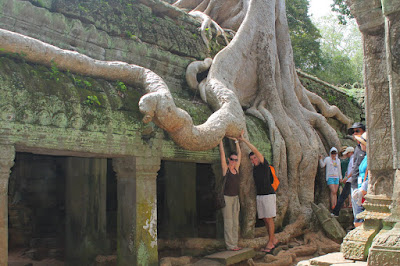 We got there just in time to hold this one up... 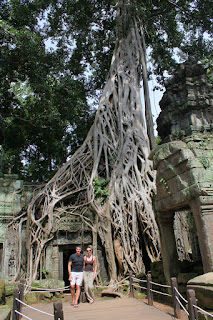 This is a picture of a tree eating another tree!  There is a tree inside that skeleton and they are fighting each other for resources.  My money's on the one on the outside although it will probably take another 200 years to find out who wins!
After a full day at the temples we took time to learn more about the traditional dance culture. 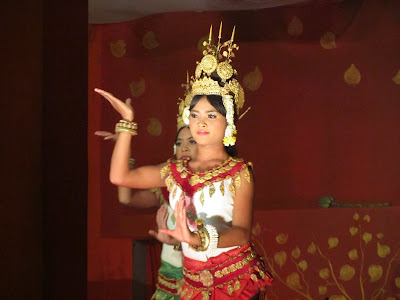 Then I used what I learned...
Another thing to mention about our travels is that we were apparently following in the foot steps of Angelina Jolie.  As she's adopted kids from 50% of the countries we visited she is widely adored and the locals try to make good use of everything she touched while she was there and every place she stayed or visited also makes sure you are aware of the honor.  In Saigon we were told we had to have ice cream where Angelina and Brad took the kids - they were right it was incredible.  Then landing in Siem Reap it intensified not only did she adopt there but she filmed Tomb Raider there in Angkor Wat.  So several bars offer the "Angelina Jolie Tomb Raider" cocktail, etc.
The next day we spend the morning at a Khmer cooking class, staring with the market to pick up our fresh ingredients. 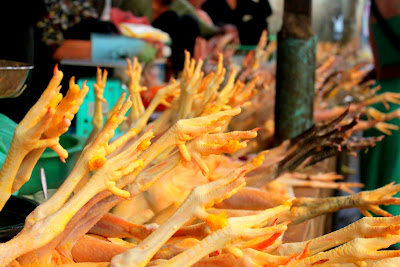 Chicken feet!  Okay, we didn't pick any of these up. 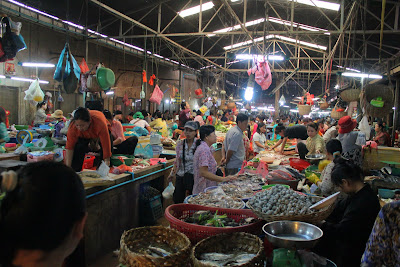 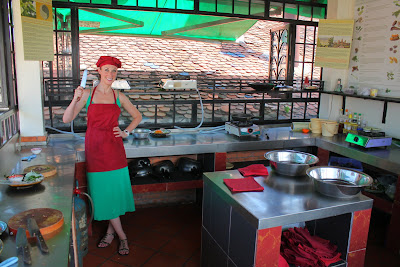 Our open air kitchen at Le Tigre de Papier.  I'm warning Matt not to make fun of my cooking - knife in hand for back up...
Some of our creations! 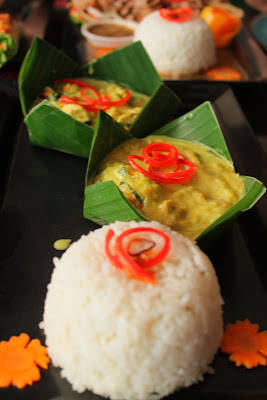 Seriously I made this (even the palm leaf bowls)! Amok Chicken. 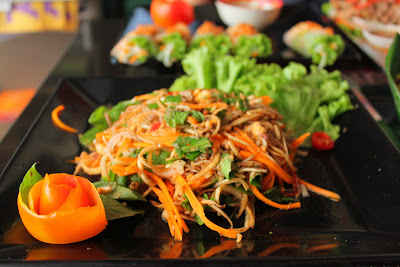 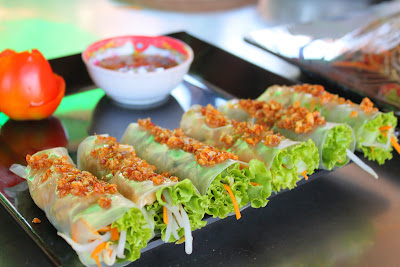 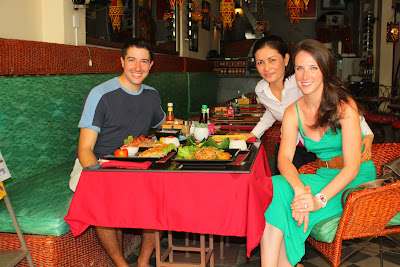 A perfect send off from Cambodia.  We couldn't have made lunch without our fabulous head chef Channy.
Posted by Katie Shaver at 2:04 PM

Thanks for a quick little trip, cooking lesson - and Katie's dance lesson!

Great photos, too. I just don't see how you could say no to all those chicken feet reaching out to you.