With a Name Like Haggis, It Has to be Good...

This past week was full of heart-stopping feasts. In addition to two Thanksgivings, our friend and resident Scot (Emma) made a home cooked Scottish feast for St. Andrew's Day. St. Andrew is the patron saint of Scotland and it's the Scottish national day and it is a time for traditional foods and getting together with families. Although there is a lot of lore about the significance of this day worldwide, it is also considered to be the day where women-in-waiting anticipate mythical signs regarding their future husbands. Read more about it here.

Emma put out a beautiful, yet mysterious spread. She also refused to tell us what any of the items were until we tried them...yikes! I thought cafeteria mystery meat was suspicious, but Scottish mystery meat is just plain scary. A number of the dishes included the infamous haggis, which I tried for the first time. I figured that coming from a girl who eats scrapple with no qualms, I shouldn't be picky! The haggis pie was actually really good, although after my first round I wasn't brave enough for seconds. 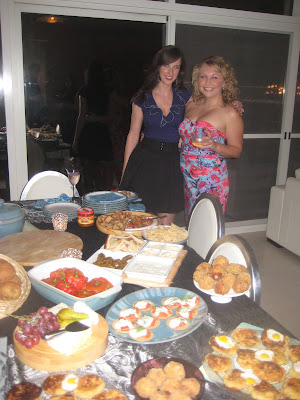 Fiona and I didn't make the food but it looked great!
The dish of the day was the yummy cock-a-leekie soup. In addition to having a fun name to say it was a delicious savory soup that takes about four hours to make from scratch consisting of chicken stock and meat, and a cinnamon and prune garnish.

My bravery only lasted for so long, and I stopped short of trying the black pudding. I think that is a dish more suited for vampire friends!

Matt topped off the evening by bringing mulled wine packets back from his trip to the UK. You drop these satchels with spices and sugar into about two liters of red wine heated over the stove and it makes a delicious fruity, spicy warm drink. It tastes like Christmas in a cup - maybe next year I'll have a mug to wash down that black pudding! 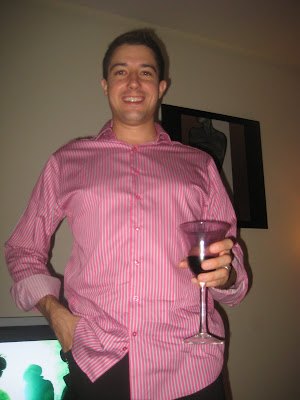 Brewing up some mulled wine! 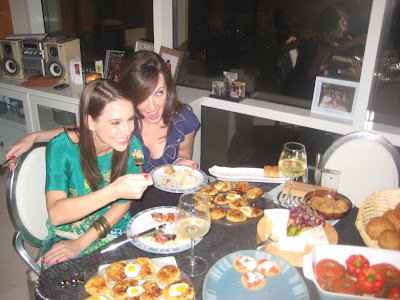 Trying haggis for the first time, a sisterly bonding activity. 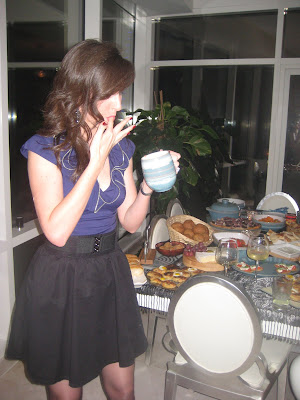 Yum! The cock-a-leekie soup is finger-licking good!
Posted by Katie Shaver at 10:24 PM

How many people came to this feast?! Or are you accustomed to spreads like this after Matt's 30-course birthday party?